The recent interview with Chinese virologist Li-Meng Yan was flagged to contain "false information" about coronavirus.

The Chinese whistleblower who claims that COVID-19 came from a laboratory in Wuhan China has appeared in Fox News show "Tucker Carlson Tonight" on Tuesday, September 15.

The show posted a video of the interview on social media platforms with "Chinese whistle-blower to Tucker: This virus was made in a lab & I can prove it" as caption. However, on September 16, Facebook and Instagram flagged these posts as false information "that multiple independent fact checkers say is false." 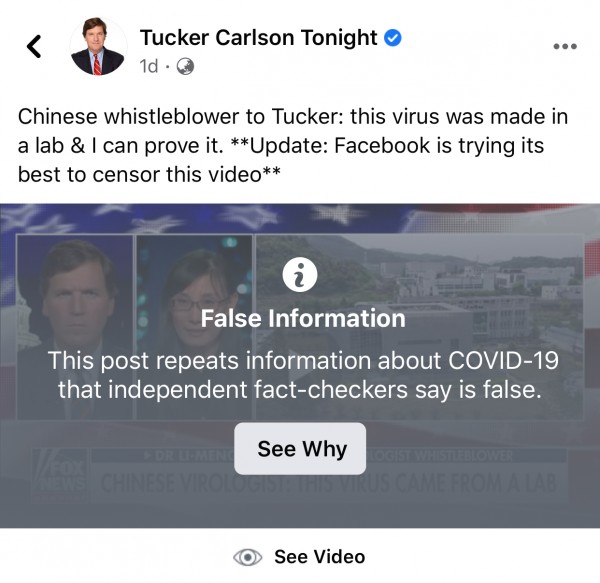 Screens were applied over the video along with a "false information" warning and "See Why" option which shows fact checks from various organizations against Li-Meng Yan's claim. Meanwhile, users may still opt to see the video by clicking on the "See Video" icon below the post. The video has already been viewed by 1.3 million times.

Tucker Carlson Tonight soon posted about the warning. "Facebook is working hard to make sure you're unable to see our latest post regarding a coronavirus whistleblower."

The post added that the social media network does not want users to share the video while limiting people who can view it. The show noted that "this is censorship" and it vowed to address the issue on the show.

The video's captions have also been updated saying "Facebook is trying its best to censor this video."

The show's host Tucker Carlson gave a background about Yan's claims that COVID-19 is "not from nature" on the September 16 edition of the show.

Carlson said that a paper published in February from the South China University of Technology showed the possibility that coronavirus was created from a lab. The paper also noted that "safety levels may need to be reinforced in high-risk, bio-hazardous laboratories." The paper also suggested that these laboratories must be relocated away from densely-populated areas and city centers.

However, the Chinese health officials and intelligence agencies just ignored the findings, despite being created by scientists. Nearly six months after, Yan exposed where the virus originated after fleeing to the U.S. in April.

As one of the first scientists to study about Wuhan outbreak in December, she claims to have scientific evidences that the SARS-Cov-2 virus is "not from nature." She also confidently said that the virus was "created in the lab" from the Chinese military-owned facility. When Carlson asked whether the Chinese government released the virus in purpose, the virologist replied: "Yes, of course, it is intentionally."

On the recent edition of the show, Carlson said there is no way to verify if the claims are true, but he noted that the doctor "was not a quack" who makes a very serious point. Yan has published peer-reviewed studies on coronavirus in respected scientific websites, Nature and The Lancet.