SpaceX CEO Elon Musk Claims Humans Journey to Mars Possible in Three Years as Starship will Be in Automatic Mode By Next Year!

Elon Musk revealed in an interview that SpaceX's reusable Starship will be the key to make his plan to ensure humans can survive for a long time in a Martian city, Mars, a reality.

The billionaire told the New York Times' host Kara Swisher when he guested in the podcast Sway that humans could take flights on the rocket in two years. He also revealed details of the Starship rocket that will take people to Mars. 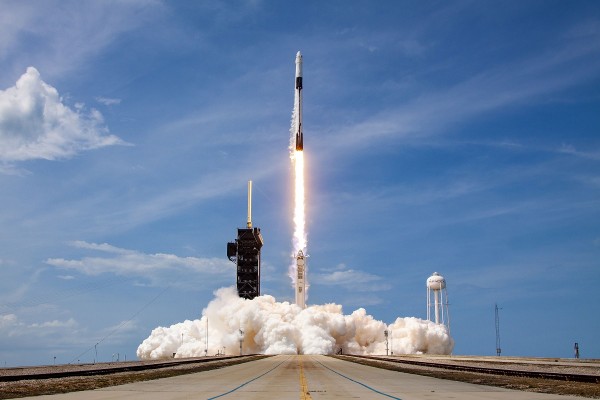 (Photo : SpaceX via Getty Images)
CAPE CANAVERAL, FLORIDA - MAY 30: In this SpaceX handout image, a Falcon 9 rocket carrying the company's Crew Dragon spacecraft launches on the Demo-2 mission to the International Space Station with NASA astronauts Robert Behnken and Douglas Hurley onboard at Launch Complex 39A May 30, 2020, at the Kennedy Space Center, Cape Canaveral, Florida. The Demo-2 mission is the first launch of a manned SpaceX Crew Dragon spacecraft. It was the first launch of an American crew from U.S. soil since the conclusion of the Space Shuttle program in 2011.

The Starship rocket is currently being constructed and undergoing tests at SpaceX's massive facility in Boca Chica, Texas. Musk also revealed that they will launch Starship in around August 2021.

"We will run it in automatic mode, without people," said Musk adding that it will be safe for people to go aboard the spacecraft in as early as two years, "but definitely three years."

The Tesla and SpaceX CEO also told Swisher that the sun will eventually "expand and engulf Earth," so humans must go to Mars and build an interplanetary civilization. "This is for sure going to happen, but not anytime soon," he added.

Well, a scientific study from the University of Warwick supports Musk's prediction, although it will occur in the next six billion years.

Meanwhile, when asked if he has plans to go to space aboard the rocket, Musk said he is not ruling out the idea, although he has not thought of it yet. 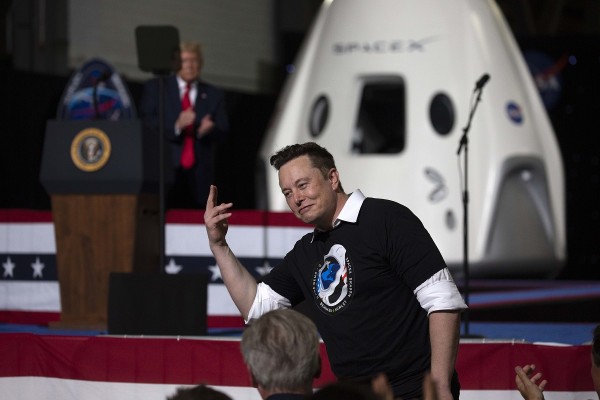 (Photo : Saul Martinez/Getty Images)
CAPE CANAVERAL, FLORIDA - MAY 30: U.S. President Donald Trump acknowledges SpaceX founder Elon Musk (R) after the successful launch of the SpaceX Falcon 9 rocket with the manned Crew Dragon spacecraft at the Kennedy Space Center on May 30, 2020 in Cape Canaveral, Florida. Earlier in the day NASA astronauts Bob Behnken and Doug Hurley lifted off on the inaugural flight and will be the first people since the end of the Space Shuttle program in 2011 to be launched into space from the United States.

Tech Times previously reported that SpaceX would need to produce 1,000 Starship rockets to sustain a Martian city. To reach a goal of taking a million people to Mars by 2050, SpaceX will launch about three Starship flights per day with 100 humans for each flight. Musk told Swisher that he is positive his firm can make it happen.

Musk noted that SpaceX can "lower the cost to space" by using advanced technology and creating reusable rockets. This saves much of taxpayers' money as reusability is highly significant for humans' access to space."

"It is really kind of insane to have a rocket be expendable," he said. To be able to build a machine that crashes into the ocean and leaves debris at the seafloor is "crazy."

Read also: Tesla CEO Elon Musk Says He and His Family Will Not Get a COVID-19 Vaccine Because He Is Not at Risk

The first SpaceX's Starship prototype was revealed in 2019, and its main goal is to send humans to Mars. However, Musk's initial plan was to have the rocket launched in low orbit in March with humans inside by the end of 2020.

However, due to some issues with the Starship program since 2019, there have been adjustments in SpaceX's schedule.

While Musk hopes to ensure civilization is "improving over time," he is worried that humans are slowing down progress, "and we are getting old."

Despite the bumps and competitions, Musk is not worried about the delays in the company. "Nobody has ever made a fully reusable orbital rocket. So just having that at all is pretty significant," Musk noted.

As SpaceX is currently competing with Jeff Bezos' Blue Origin and other private firms in the space industry, they have different approaches to ensuring humanity's survival in space.

"If you have advanced rockets, you can decide whether you want to live on a space station thing or Mars," Musk noted, adding that there is a long way to go. "We can't even get back to the moon," he added.

Read also: Elon Musk Would Need 300 'Ready to Die' Persons a Day as Soon as 1,000 Starship Flights are Launched