The National Aeronautics and Space Agency, also known as NASA, recently released a breathtaking image compilation of several stars, deep space probes, and exoplanets with the two-year research of the Transiting Exoplanet Survey Satellite, otherwise known as TESS. The extended study of the northern satellite focused on looking beyond the galaxy's depths, discovering an array of exoplanets outside the Solar System.

NASA's TESS has given the space agency and the public a sight to see even without the expense of being within NASA. Telescopes? No need for that as the Transiting Exoplanet Survey Satellite (TESS) brought the experience to the world. NASA's TESS is nowhere near the end of its mission and will continue to look beyond.

The two-year non-stop monitoring of the satellite gave way to discovering planets that are farther than the edge of the Solar System at nine billion miles away. This distance is enough to travel from the Earth towards the Sun 97 times, having a distance of almost 93 million miles.

TESS, otherwise known as the 'planet hunter,' already captured 75 percent of the sky after its two-year course of going beyond the solar system. Exoplanetary probes are commonly carried out by NASA now, as it aims to discover new worlds and confirm its existence to the public.

NASA's research led TESS to discover 74 exoplanets already, in two years. Astronomers and researchers are aiming to discover all 1,200 exoplanets that were speculated to exist successfully. Six hundred of these exoplanets are in the area of the northern sky, meaning that TESS will be the perfect candidate to play 'hunter.' 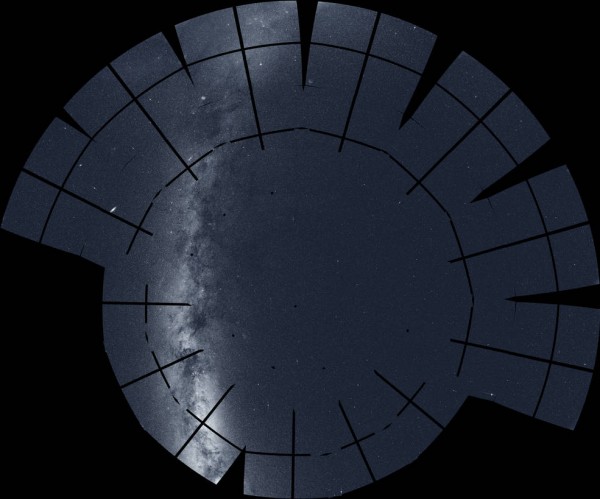 (Photo : Credits: NASA/MIT/TESS and Ethan Kruse (USRA))
This mosaic of the northern sky incorporates 208 images taken by NASA’s Transiting Exoplanet Survey Satellite (TESS) during its second year of science operations, completed in July 2020. The mission split the northern sky into 13 sectors, each of which was imaged for nearly a month by the spacecraft’s four cameras. Among the many notable celestial objects visible: the glowing arc and obscuring dust clouds of the Milky Way (left), our home galaxy seen edgewise; the Andromeda galaxy (oval, center left), our nearest large galactic neighbor located 2.5 million light-years away; and the North America Nebula (lower left), part of a stellar factory complex 1,700 light-years away. The prominent dark lines are gaps between the detectors in TESS's camera system.

The exoplanet satellite, popularly known as TESS, is given one mission and purpose to discover and identify new planets for its entire life. TESS incredibly makes use of its four cameras that has 16 sensors all-in-all. NASA's scientists believe that the northern sky is the gateway to look beyond the galaxy, with TESS as its 'scopes' that magnify images.

According to NASA, the northern mosaic covers less of the sky than its southern equal, so what scientists did was re-angle the camera and focus it to the point where it 'opens up' the skies. The refocused TESS now minimizes the scattered light's impact from the planet and its satellite, the Lunar Moon. This resulted in an outstanding coverage of the new worlds.

How does the 'Planet Hunter' TESS Work?

NASA characterizes TESS as the 'planet hunter' primarily because of its focus on looking for planets beyond the solar system, deep within the corners of the galaxy. TESS locates and searches for planets by making use of stars over large regions of the sky.

The tiny changes in brightness will alert the satellite and may potentially mean that it is a planet. Whenever a new world passes through a star, it temporarily blocks out a star's light, highly suggesting that it is indeed what TESS is looking for. This process is called the 'transit,' repeating the occurrence with the orbit of a planet around a star.

NASA will continue to use this method to be useful for the space agency and its researchers. TESS's 'transit' strategy is responsible for three-quarters of the amassed 4,300 exoplanets now known to man.

ALSO READ: NASA: Asteroid 2020 RK2 the Size of a Boeing 747 Plane is Headed for Earth TOMORROW!