Google may have found a new way to monetize its photo editing and management app Google Photos by making some of its editing tricks exclusive for Google One subscribers.

According to XDA Developers, as reported by The Verge, while Google Photos is a free app, it is making some of its free editing features available only for subscribers of Google One.

The XDA Developers article noted that the latest Google Photos updates include some hidden code strings that point Google's decision over the app features.

XDA's Mishaal Rahman shared on Twitter that Google Photos has reserved its Color Pop feature for Google One paywall as shown in screenshots sent to him by a Google Photos subscriber.

Rahman sent another tweet that Google is already testing the approach on some people as he "was still able to use the Color Pop feature" even without Google One subscription. "So it seems this is being tested with a handful of users," Rahman said on his tweet. 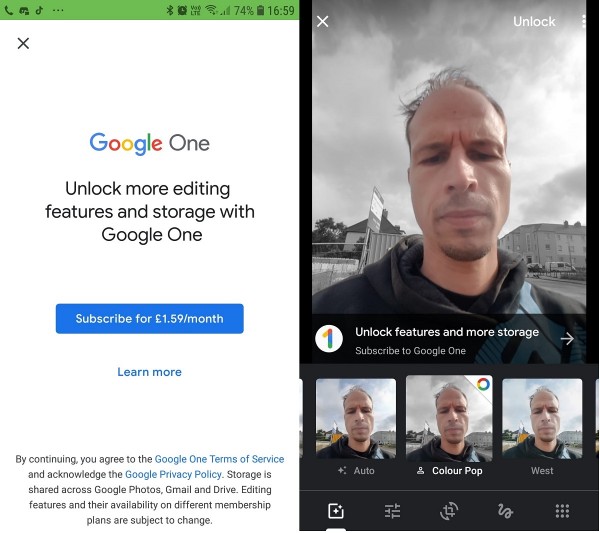 However, Google told The Verge that it is simply offering a new version, which is useful on wide array of photos than the free Color Pop. As Google noted, color pop "continues to be available for anyone to use, at no cost." It can be used for portraits and other photos with depth information.

On the other hand, Google One members can apply the feature to more photos, even those without depth information. The tech giant also noted that is part of the ongoing roll out that started earlier this year. Meanwhile, Google did not mention other editing features and tools that might be made exclusive to Google One subscribers.

This is not the first time Google has attempted to monetize Google Photos as it recently launched a service where customers can receive a selection of 10 printed shots per month.

Not happy with Google's decision

Google's decision to move some Google Photo features on the paywall did not excite netizens. Twitter user @Raj mocked Google's decision. He tweeted: "Google needs to stop behaving like small app developers." He also said that photo and video editing apps should be available even without getting premium plans, just like iOS.

Google needs to stop behaving like small app developers. Just like iOS, photo and video editing apps should be made available without any premium plans. — Raj (@justwondered1) November 6, 2020

Gil Alexander warned that if Google Photos would continue with its decision, it will lose its users while another user said he would still not get Google One.

Google One was launched in 2018 as a Cloud storage service intended for consumers who may have used up their free 15 GB of storage. It offers monthly subscriptions starting at $1.99 per month for 100GB of cloud storage, which can be used for all Google services, including Google Photos, Gmail, and Google Drive. Subscribers also get additional member benefits and access to Google support, which can be shared with the whole family.

The 100 GB is relatively cheap as it can also be used for backups of Android device. Also, Google recently announced a new VPN feature for Google One subscribers of the 2TB storage plan for $9.99 per month.

Related article: Google One Rolls Out Free VPN Access to 2TB Subscribers with Android in the US