A group of researchers and scientists discover almost 2,000 asymptomatic SARS-CoV2 virus-positive cases among the US Navy's Marine Recruits despite observing the two-week quarantine measure and strict lockdown situations. The group now questions the status quo of the quarantine's effectivity and relevance with regards to the public's lockdown observance. 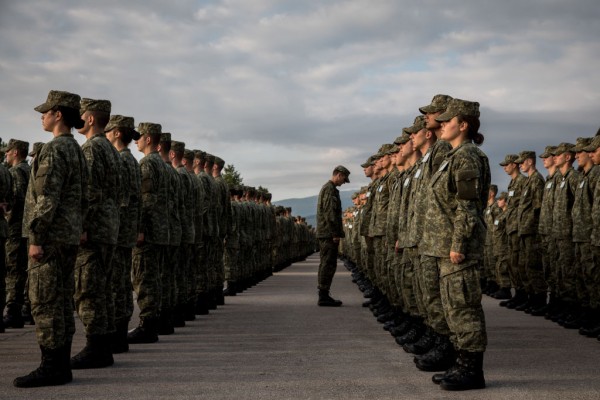 (Photo : (Photo by Chris McGrath/Getty Images))
FERIZAJ, KOSOVO - JULY 25: A Kosovo Security Forces (KSF) basic training instructor inspects his recruits during the morning flag ceremony during the final weeks of their nine-week basic training on July 25, 2019 in Ferizaj, Kosovo. Created in 2008 the KSF was formed mainly to deal in crisis response, civil defense and the removal of ordnance left from the 1990’s conflicts, however in December 2018 the Assembly of Kosovo passed legislation to redefine the KSF as a professional military force. The outlined 10-year plan has seen Kosovo set-up a defense ministry and grow recruiting for an army aimed at having 5,000 active soldiers and 3,000 reservists. The move was heavily criticized by Serbia, suggesting it could unsettle the region and provoke military intervention by Belgrade. In 2019 the KSF will run two basic training sessions, doubling that of previous years, with each group of 350 recruits between the age of 18 and 23 undergoing the grueling nine week course before their final exams. After successfully passing their exams they will be assigned various jobs at bases across Kosovo.

The Icahn School of Medicine at Mount Sinai and the Naval Medical Research Center spearheads a study regarding the new Marine recruits while observing their two-week supervised quarantine requirement. This measure is mandatory for all recruits before joining the training and activities of the US Navy to avoid the transmission of COVID-19.

However, researchers were able to gather a massive 2,000 Marine recruits to test positive for the coronavirus; despite the 14 days of quarantine prescribed and even monitored by their superiors and the scientists. According to Medical Xpress, the quarantine measures were strictly followed by the future cadets and were even observing social distancing.

The group also noted that the Marine recruits were wearing face masks at all times, maintaining the best practices advised to help in stemming the transmission of the coronavirus. The tests were made in random order and proper scheduling, not by basing on the symptoms or state of the person under monitoring.

The scientists' study was recently uploaded to The New England Journal of Medicine published yesterday, November 11. The course aims to determine whether lockdown and quarantine measures that are observed in public are sufficient to stop the spread of the global pandemic's virus, the SARS-CoV2. 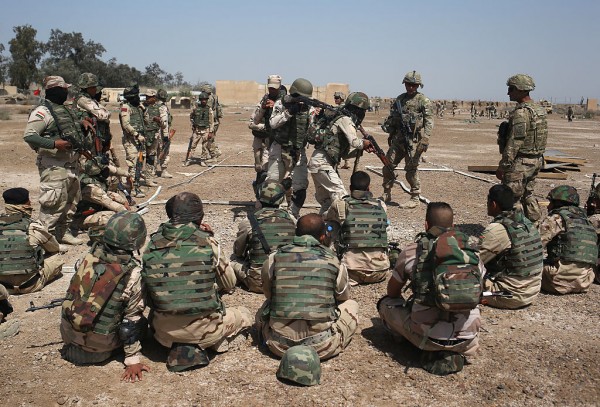 (Photo : (Photo by John Moore/Getty Images))
TAJI, IRAQ - APRIL 12: U.S. Army trainers instruct as Iraqi Army recruits at a military base on April 12, 2015 in Taji, Iraq. Members of the U.S. Army's 5-73 CAV, 3BCT, 82nd Airborne Division are teaching soldiers from the newly-formed 15th Division of the Iraqi Army, as the Iraqi government launches offensives to try to recover territory lost to ISIS last year. U.S. forces, currently operating in 5 large bases throught Iraq, are training thousands of Iraqi Army combat troops, trying to rebuild a force they had origninally trained before the U.S. withdrawal from Iraq in 2010.

According to the study published on The New England Journal of Medicine entitled, "SARS-CoV-2 Transmission among Marine Recruits during Quarantine," the US Navy and the Marine recruits were observing strict and military-enforced measures during the study.

Despite that, several of the recruits were still infected by the virus and were unaware that they already carry COVID within them. Asymptomatic cases are more common during the present day as people mingle or go to public settings and bring the virus around with them.

The study would be an excellent application for public settings in the country, particularly in everyday market settings and even educational institutes. The Marines were already enforcing strict observation of the government's guidelines regarding COVID-19 but still managed to test 2,000 people who carry the coronavirus.

How Did the Marine Recruits Observe Quarantine Measures?

Based on the research on NEJM, the Marines were given two weeks at home to quarantine before being called out to the training facility which they will start their classes in. The Marines were also taken their daily temperature checks and wears face mask even during training sessions.

The recruits are also observing a two-person per room set-up that puts a sufficient gap between both inhabitants of their living quarters. Each class have their schedules of dinner times, and the facility uses to ensure that there will be no contamination among different groups which enrolled for the course.

Despite all of these measures, 1,848 Marine recruits and study participants were able to catch the virus and transmit it among themselves. The researchers are now making this study known to the public to raise awareness that even specific measures are not effective against the notorious COVID-19.