There are very few things on Earth that can survive anything, and among them are small microscopic animals known as tardigrades, which are also deemed as water bears--and they are incredibly indestructible that they might actually be the only living organism on the moon right now. 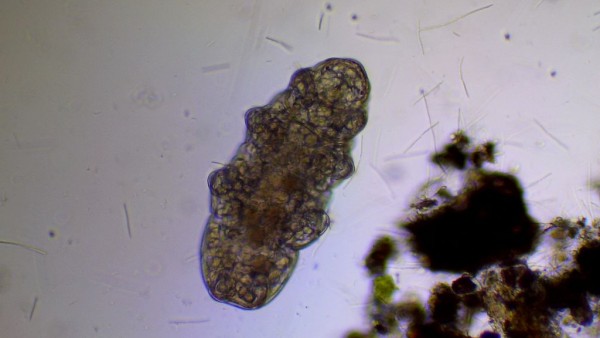 (Photo : By Dmitry Brant)
Dehydrated tardigrades were sent aboard an Insraeli spacecraft that crash landed on the moon.

According to Inverse, scientists believe this possibility after an Israeli Beresheet spacecraft attempted to land on the moon in April 2019.

Unfortunately, things did not go well, according to plan and the spacecraft ended up crash landing on the lunar surface along with its unusual cargo, including a copy of the entire English-language Wikipedia, a disk containing 30 million pages of details about the Earth, and thousands of the tiny dehydrated water bears.

Dehydrating life forms brought to space is not uncommon.

It's a process that helps slow down an organism's metabolism and will help suspend them in a near-life state, then once they reach their destination in space, they would be rehydrated by something or someone, bringing them back to life.

All of these were included by the non-profit organization, The Arch Mission, as an attempt to document life on Earth.

Read More: NASA Explains How Perserverance Rover Will Land on Mars on February 2021

Did the Water Bears Survive?

Now, scientists believe that despite the crash, the tardigrades would have survived, especially as they have survived harsh environments in the past, including space.

For example, back in September of 2007, the National Aeronautics and Space Administration (NASA) sent two species of dehydrated water bears to space through the Foton-M3 mission, where the tardigrades were exposed to solar radiation and the vacuum of space.

After going back to Earth, the water bears were rehydrated and survived everything they faced in space as if nothing happened.

Moreover, the tardigrades sent to space were suspended in epoxy and covered in micro-thin sheets of nickel, which experts believe would have cushioned their landing, enabling them to survive the crash.

However, in order for them to go back to their normal state, they would require water to rehydrate themselves, which is the challenge if they were able to survive, seeing as the lunar surface didn't exactly have liquid water.

No Way of Assuring

So, would the tardigrades have taken over the moon?

Due to their state when they were delivered in space and the lack of liquid on the moon, they might not have exactly started their population on the moon and would have been less likely a reality.

The question has remained in the heads of experts ever since the crash was reported early last year.

In a past report by WIRED, Nova Spivack, the founder of the Arch Mission Foundation, watched the live stream of the Beresheet's supposed landing on the moon, and after the crash was confirmed, he was one of the first ones to ask the question.

"For the first 24 hours we were just in shock," Spivack said. "We sort of expected that it would be successful. We knew there were risks but we didn't think the risks were that significant."

Until now, it is hard to say whether the tardigrades aboard the Israeli Beresheet spacecraft survived and whether they have found a way to rehydrate themselves or maybe adapt to their surroundings yet again.