Elon Musk to Host a 'Fallout-themed' Party for Vegas Loop's Opening with The Boring Company!

The Boring Company's first iconic project that had its name resonate across the country, the Vegas Loop, has now finished its construction and would soon be opening and launching with CEO Elon Musk. The CEO said that the opening would be a theme party, featuring the iconic design of the game called "Fallout" which has a post-apocalyptic setting in a dystopian world. 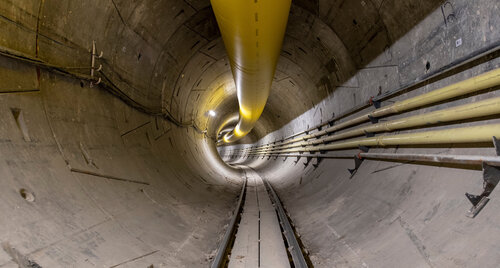 The company Elon Musk started and has developed a tunneling program with, The Boring Company, has finished its construction of the famed "Vegas Loop" which is the country and the world's first EV-powered underground tunnel. Instead of creating a railway underneath, the company sped up production and reduced costs by using Tesla's electric vehicle for the venture.

The project aims to alleviate traffic above the ground, as it would transport people coming from Las Vegas' airport, and zoom them across a massive stretch of underground tunnels, avoiding Vegas' traffic, especially on rush hour. The ingenious project has only completed up to its original phase of the Convention Center, but Musk initially revealed that it plans to expand in the county.

The multi-company CEO Elon Musk posted a photo on his Twitter account (@elonmusk), showing a finished tunnel with Teslas behind them, along with his sons posing for the snap. The site visit of Musk in the Vegas Loop signifies that the company is only already wrapping up with its finishing touches, soon to open the underground tunnels for public use.

Under Vegas in @boringcompany tunnel yesterday with my boys pic.twitter.com/tLfOuiEdFm

A fan replied to Elon Musk's tweeted photo, and have stated that he is excited for the "opening rave" or launch of the Vegas Loop once it is opened for public use. Elon Musk replied to the thread, saying that there would be a "Fallout-themed" party in the underground tunnel, as soon as the company and CEO are allowed to host a gathering during this pandemic season.

"Fallout" is an ingenious theme for this party, and would suit the setting and setup as it features an underground location, which is also known in the game as the nuclear bunkers used to survive the world's state. The game features an action survival genre, with people taking on the role of a nuclear survivor.