GameStop Stock Projected to Hit $15B Soon All Thanks to Elon Musk's 'Gamestonk' Tweet!

GameStop is rejoicing for an impressive increase in its stocks after a massive jump to $10 billion and is expected to continue its growth to a whopping $15 billion thanks to Tesla CEO, Elon Musk, and his tweet about this. With a simple one-word tweet and a link which the CEO shared on social media, the surge of growth for GameStop is not coming to a stop. 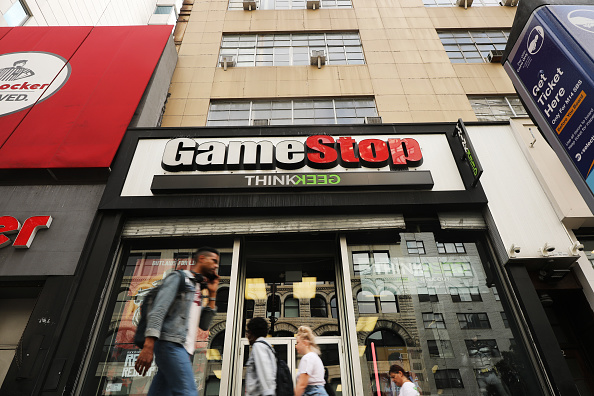 (Photo : Photo by Spencer Platt/Getty Images)
People pass a GameStop store in lower Manhattan on September 16, 2019 in New York City. GameStop has announced that they will be closing between 180 and 200 stores before the end of the fiscal year due to a drop in sales.

The popular gaming retail company of almost 37 years, GameStop, is seeing a record high of $10 billion on its stocks, because of traders and sellers that have been competing in terms of shares. The gaming company's market shares from its investors rose a massive 92.7 percent, which is more than what the company has expected for the start of this year.

This event is the second time GameStop Corp. reached $10 billion, but this would be the first time the company would see a shot at surpassing the stock.

According to Tesla and SpaceX's recent tweet (@elonmusk), Elon Musk was amazed at the massive growth of GameStop during the start of this year and attached a Reddit link that shows GameStop's skyrocket profits. The CEO only said one word and attached the link, but it already led people to check out the funding and might have hauled several investors.

"Gamestonk!!" was the tweet by Elon Musk, incorporating the name of the company, GameStop, and the popular stock market meme that says "Stonks" whenever there is a massive increase or decrease in money. The CEO is known to be a popular user of modern jokes that are called "memes," which he uses in his everyday language and tweets.

The simple tweet by Elon Musk is said to be a massive contributor to GameStop's stocks from improving and growing in the market, as Musk hauled more investors to be interested in the gaming company.

According to Market Watch. com, Elon Musk has already proved that his recent tweets and statements had a direct relation to stock increases of different companies including his recent tweet about Etsy. This website was where he bought the knitted head accessory for his dog that copies "Marvin the Martian" from the popular cartoon "Looney Tunes."

Additionally, Musk was directly related to a massive stock increase of "Signal Advance," a Texas-based Health Care after tweeting about the use of "Signal" messaging application. This event was during WhatsApp's recent privacy policy that keeps the private information of its users, leading to a massive boycott of the application.

While Elon Musk is directly related to these stock increases, he does not impose or intend to promote its stocks via Twitter, because the CEO was only talking about it.