Want to defeat Aerodactyl? As a new month commences in "Pokemon Go", Team Rocket becomes the star of the game. Therefore characters Jessie and James will be at the spotlight until the month of February ends. This means that players will be challenged to take down Jessie and James along with other Team rocket leaders. 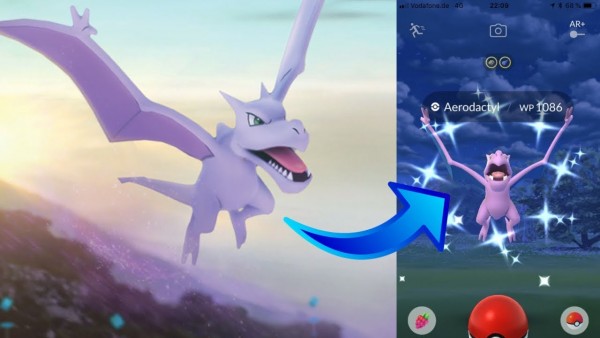 When countering Team Rocket, one has to always go through the leader. The team's leader Cliff is especially difficult to defeat. However, as Distractify notes, one thing remains certain for almost all his attacks. He seems to pick one consistent Pokémon to begin his battles, which is Aerodactyl. Just like Cliff, Aerodactyl can be tricky to defeat. This guide will show you Aerodactyl's weaknesses, strengths, and its suitable counters.

Aerodactyl has been introduced in the game since Generation I. It is a dual type Pokemon with Rock/Flying Fossil abilities. It has risen from the Old Amber. While it is not something that will potentially evolve into another Pokemon, it is capable of evolving into a Mega Aerodactyl when used with the Aerodactylite.

According to Bulbapedia, since Aerodactyl is a rock and flying Pokemon, it can be very weak to Steel, Water, Electric, Ice, and Rock type of Pokemon. Normally, it can be damaged by Dragon, Dark, Fairy, Psychic, Grass, Ghost, and Fighting type Pokemon. This means that when you use a Pokemon in your collection with these abilities, you automatically have an advantage over Aerodactyl.

However, it can be resistant to Flying, Poison, Bug, Fire, and Normal type Pokemon. Moreover, it is already immune to Ground Pokemon. In some circumstances, gravity is in effect. Therefore, the strength of Ground Pokemon may double, which makes Aerodactyl quite vulnerable to it.

Now that you know its strengths and weaknesses, you may have a list of counters in mind that you can go to battle with Aerodactyl. However, you may want to try these tried and tested Pokemon counters against Aerodactyl: Raikou, Electivire, Blastoise, Tyranitar, and Empoleon. These can be really effective in countering Aerodactyl as they have fats and charge moves that may be a good defense against the attacks of Aerodactyl.

Just make sure never to pick Flying, Poison, Normal, Ground, Bug, and Fire Pokemon as they can be a weak defense for Aerodactyl in the battle. Be sure to steer clear of any Pokemon that Aerodactyl is already immune to.

Do note that while you may be able to defeat Aerodactyl with these tactics in the battle, there are other Pokemon that you need to attack in Team Rocket leader Cliff's lineup such as  Gallade, Slowking, Cradily, Dusknoir, Mamoswine and Tyranitar.

Related Article: Excited With the New 'Pokemon GO' Team Rocket Celebration? Here are Important Details You Need to Look Out For