The Arduboy Nano Mini Gameboy Clone Needs to be Played with a Microscope: Where to Buy?

Remember when the Game Boy first arrived in the market in the 1990s? It easily became a cultural icon, or even a status symbol with hundreds of accessories being developed such as magnifying lenses. However, for its micro-clone "Arduboy Nano", the gameboy is downsized to an inch-tall gaming device where you need the help of a microscope to be able to play with it. 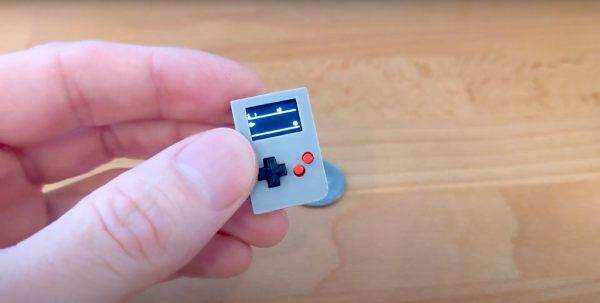 The First Release of Arduboy

As Gizomodo reports, Arduboy Nano's creator Kevin Bates has filled the world of gaming with incredibly unique and creative inventions, to say the least. Back in 2014, Bates launched in public his card-thin electronic gaming card where you will be able to play "Tetris" in your wallet.

The invention has impressed so many developers and gaming enthusiasts that it has become an officially licensed handheld gaming system. It brought fruition to Bate's "Arduboy". The Arduboy was an open source clone inspired by the Game Boy itself. Since then, a number of developers have contributed to the proliferation of hundreds of games that were playable in Arduboy.

The credit-card sized Arduboy was definitely a revolution in gaming systems. It has been recorded as the smallest handheld gaming system in history. However, Bates figured that this time, the Arduboy doesn't seem to be small enough anymore. Besides, people don't seem to carry plastic cards anymore, and would rather prefer an online transaction.

Read more: Arduboy Lets You Make And Play Video Games On A Device That Fits Inside Your Wallet

For Bates, it was time to scale down to Arduboy for another miniaturization process. The Arduboy Nano was a challenge for Bates to overcome the boundaries of how small you can make a gaming device. Now, the Arduboy Nano is less than an inch in height. It can stand alongside the coin without appearing to be bigger.

What's Inside the Arduboy Nano?

According to Hackster IO, the case is carefully crafted from 3D-printed parts that all fit together. Inside it is a 0.49-inch, 2,048-pixel OLED display. The Arduboy Nano is powered by a 25 mAh rechargeable battery that survives about an hour of gaming. It also has a 15-millimeter speaker which is made functional using the same ATmega 32u4 microcontroller that can be found in the earlier version of the Arduboy. The best thing about this micro gaming device is that the Arduboy Nano is fully playable, given that your fingers are tiny enough to hit one button at a time and your eyes have microscopic abilities. Nonetheless, if you do not have these abilities, you can still play the Arduboy Nano with a pointing stick and an electron Microscope.

Arduboy Nano Where to Buy?

For many, this has been an impressive feat to challenge gaming systems. When asked if he has any plans of putting it into mass production, Arduboy Nano creator Bates says he currently has no plans of doing so. However, he notes that if the interest online is growing for the nano game boy clone, he might entertain the idea of giving people an experience of microscopic gaming.

Related Article: Are You Ready for a Solar-Powered Game Boy? No Need to Pause for Recharge