China's Tianwen-1 Dual Spacecraft has taken a snap of its first Mars sight as the mission will make its orbit entry today on the Red Planet. 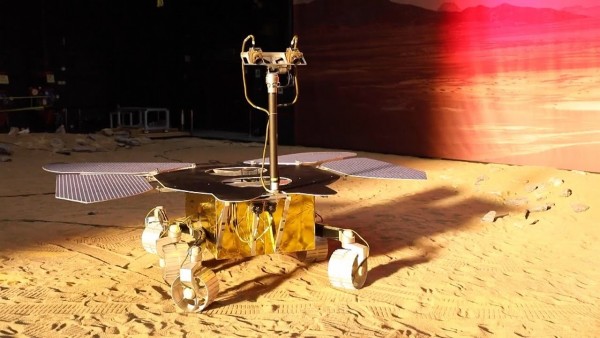 (Photo : Screenshot Youtube by SciNews)
The Tianwen-1 Mars rover was tested at the China Academy of Space Technology in a simulated Martian landscape. The rover is 1.85-meter-high, weighs 240 kilograms and is equipped with six scientific instruments. Tianwen-1 mission, orbiter, lander and rover, is expected to enter Mars orbit in February 2021. The name Tianwen (天問, Questions to Heaven) comes from a poem written by the Chinese poet Qu Yuan.

The China National Space Administration (CNSA) has released a greyscale image of Mars last February 5 to test that the footage of Tianwen-1 produces high-resolution images. The image was shot from a 1.36 million mile distance, which is about 2.2 million kilometers.

According to Live Science the image above shows the different areas of Mars' topographical features. It has the area marked with (1) which is the Acidalia Planitia,( 2) as the Chryse Planitia, (3) as the Meridiani Planum (4) as the Schiaparelli Crater and (5) as the Valles Marineris. 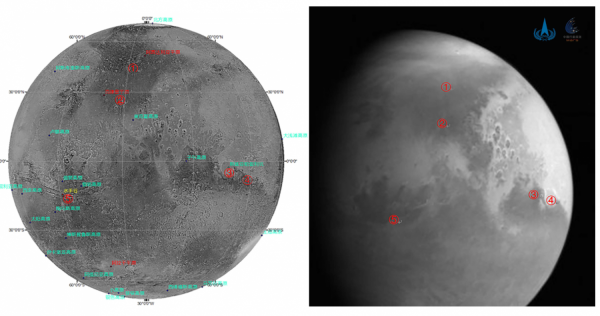 Last Friday, the Tianwen 1 which is a dual orbiter as well as a rover has been in close proximity to the red planet at just a 683,000 miles or about 1.1 million km. The probe is expected to land on the red planet today on February 10. As it approaches Mars'

CNSA ensured  the secured entry of the Tianwen-1 on the Red planet today by accomplishing a fourth fourth trajectory correction maneuver last Saturday. This was done make sure that the probe is ready on its course of entering the planet.

During the trajectory correction maneuver, the Tianwen-1 has been about 114 million miles or 184 milion kilometers away from Earth. Moreover, it has spent about 197 days in space and has completed a traveling distane of about 289 million miles or 465 kilometers. After the maneuver, the Tianwen-1 was assessed as all in good condition and ready for entry.

Because of the great distance between China's rover and the planet Earth where communication signals are coming from, there will have to be a delay in communication of about 10 minutes.

As a result, Tianwen-1 will have to start its initial commands for braking the burn and landing by itself without any help from the Beijing Aerospace Control Center from Earth. This is both an exhilarating yet ambiguous journey that has been carried out thankfully thanks to the instructions sent in advance by the Control center before the communication delay.

Moreover, China has set up a huge movable antenna that is sensitive enough to collect information from Mars as well as to track the planet's position even amidst the sky changes. The huge diameter dish will be collecting enough energy to track from the Earth.

"With the distance [getting farther], the [signal's] energy will become attenuated and denser, and that is to say, the less energy we will receive per unit area. So we need [an antenna] with a large area in order to collect enough energy," Li Chunlai, deputy chief designer of China's first Mars exploration project said in an interview via Space Co.

"The construction of the antenna is intended to receive weak scientific exploration data from Mars which is 400 million kilometers away from the Earth."he  added.

Upon entry to the orbit, China's rover will begin to position itself and prepare measures for landing. Tianwen-1's target landing site will be the Utopia Pkantita which is located below the landing site of NASA's Viking 2 rover which will be landing on Mars around May as well. Tianwen-1 will use an image sensing system to secure the spot for landing.

As the solar-powered spacecraft hits Mars' land, it will begin studying the spol characteristics of the planet's surface. Moreover, it will investigate Mars' water existence, supply, and distribution using the Subsurface Exploration Radar instrument. With the help of Tianwen 1's panoramic and multispectral cameras, it will understand the nature and composition of rocks that are in the surface of Mars.