'Destiny 2' Deadman's Tale Exotic Scout Rifle Catalyst: How to Get and Use Weapon

"Destiny 2's" weekly reset is here and it recently debuted one of the best looking modern-classic rifles on the game that captures the essence of old school weapons, the Dead Man's Tale Exotic Scout Rifle with catalyst. The weapon would be available after a series of quests, which starts with Presage, which leads to assembling the weapon and modifying it. 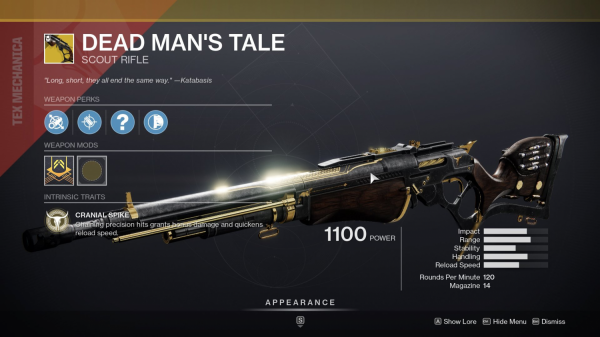 The weekly reset of "Destiny 2" happens every second day of the week, so Feb. 16's update means that it would bring new content and weapon to the game, which would be featuring an event to participate in. The popular first-person online shooting game has debuted one of its most sleek weapons that take a modern gaming twist on a classic design.

Scout rifles are for marksman and snipers who can shoot accurately, and requires only one shot for its enemies. Bungie, Inc.'s "Destiny 2" debuts such a weapon, aiming to be one heck of an equalizer in the game, making it up for grabs to everyone by accomplishing several events for this week. The rare weapon would not yet be available in the shop or dealers.

'Destiny 2' Dead Man's Tale Exotic Scout Rifle: How to Get the Weapon

According to Windows Central, accessing the weapon would begin with loading into the "Arms Dealer Nightfall Strike" quest where players would be entering a game mode for the weapon. Then, users would need to go right instead of heading towards the left entryway to start the Dead Man's tale quest for the exotic scout rifle.

Users would see a door that leads to a set of turrets that are up and running. Locate the pathway and search the area until seeing the storage crate which also gives users a signal. Take it and head to the Zavala region, particularly in the Tower to begin the quest.

In the quest, players would need to finish the objectives and accomplish them to receive rewards at the end of it. Most of the instructions and requirements are straightforward, and just by following them, users can get past them and receive the needs for the Dead Man's Tale Exotic Scout Rifle.

Players should opt for the exotic perk called "Cranial Spike," so that shooting the weapon with chains of "precision hits" would give players reloading speed and increased damage opportunities. The Dead Man's Tale Exotic Scout Rifle also has a random rolls perk that can be utilized and equipped with whatever the game offers for better weapon performance.

Additionally, players are given a catalyst slot in the latest exotic weapon, which they can load up with available and obtained special items for additional perks and effects for the scout rifle. The catalyst can be achieved or obtained from later quests in Season of the Chosen, which is live in "Destiny 2."

Related Article: 'Destiny 2:' How to Get Palindrome, Shadow Price Weapons in Season of the Chosen!-Guide