Experience the Thrill of Being a Border Inspector With 'Contraband Police: Prologue'

Guard the border, capture contrabands, and take bribes? Be the border authority you want to be with Contraband Police: Prologue.

Game developer Crazy Rocks has teamed up with hit publisher PlayWay S.A. for the first sample of this "border post commander simulator." With Contraband Police: Prologue, you play as a newly assigned border police inspector in the communist nation of Acaristan in the early 1980s. The five-day training lets you get used to the ropes, following a certain commissioner Andreyev's orders to better understand the mechanics.

The catch, however, every vehicle is passing through the border checkpoint. With the driver moonlighting as a smuggler, it is up to you to inspect everything and make sure nothing gets past you - driving licenses, cargo documents, trunks, bags, wheels, under chassis.

After your supposedly thorough inspection, you hold in your hand the power to allow or refuse them to enter your nation.

The Thrill and Routine of Border Inspection

Contraband Police: Prologue starts with a senior officer driving you off to your assignment. As you arrive, you immediately hear the voice of Commissioner Andreyev telling you what to do. Your border post includes an office that houses the mission briefs. After receiving the day's task, you move to the lever and let the first car pass.

First of all is inspecting the driver, mostly through his documents. Players are tasked with spotting discrepancies across the driver's passport and the vehicle's registration documents. Are they the rightful owner of the car? Is the vehicle roadworthy? After the seemingly tedious task, you can move to the actual vehicle inspection. 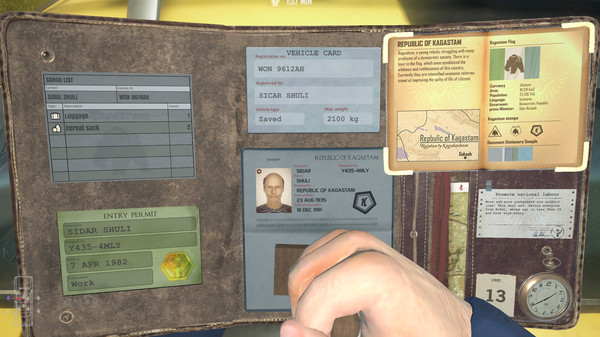 Abandon common logic and make sure no stone remains unturned by the end of your inspection. From hidden compartments beneath the hood to the underside of vehicles and the tires, contraband found is a service to your nation. In Contraband Police: Prologue, your inspections range from simply inspecting the vehicle visually to dismantling parts of it based on your gut feel. Smash vehicle accumulators and cut tires open. It appears that Crazy Rocks and PlayWay made sure that only the imagination is the limit. Find illegal food, beverage, and even prohibited drugs and confiscate them.

After handing down your judgment on whether you let them pass or deny them entry, the game prompts you if your decision has been correct and rewards you with additional funds for every good call.

Besides the clerical job of inspecting documents and vehicles, you are also tasked with the upkeep of the border checkpoint. Funds are automatically deducted at the end of every day to cover the expenses.

In its first-person view, you can walk around the site:

The most thrilling feature for Contraband Police: Prologue has to be the car chases. Every now and then, offenders drop all pretense and try to run away from the patrol. Players then rush to the vehicle and drive to chase down the fleeing smuggler.

While the game remains to be released on Steam's entirety, Contraband Police takes simulation games in a weird yet oddly satisfying direction.

Mr. Prepper 2021 Update: Fight Against Totalitarianism, Fly Your Rocket in This Survival Sim

Guards Are Battling Contraband-Smuggling Drones At US Prisons