'Valheim' Guide: How to Find Merchant Haldor, Collect Coins, and Get Megingjord Belt

Surviving the Viking world of "Valheim" is a challenge that hundreds of thousands of players all over the world are now tackling, cooperating via multiplayer to either take down bosses easier and gather resources or playing solo and taking in each day slowly. 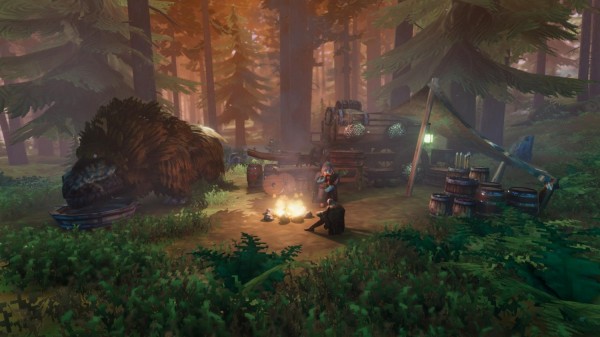 (Photo : Valheim on Steam)
Haldor is a merchant on "Valheim" that has a few important wares for sale.

However, as a survival game, "Valheim" players need a strategy to survive, and one of the best ways of doing so is getting enough resources as well as having the right gears and equipment to defeat enemies in-game, so finding Haldor the merchant is a task every player should complete.

The merchant also has the Megingjord belt, which will prove to be useful in-game as it will increase your storage capacity, but to acquire the belt, you need to collect enough coins to purchase it.

According to IGN, Haldor's location will differ for every player due to the game's procedural generation and the map seed you have, so it's harder to find him than the game's bosses.

Nevertheless, Haldor will only spawn in the Black Forest biome, which you would be encouraged to explore after defeating the deer god Eikthyr, who is the first boss players will meet on "Valheim," so do explore the area to find the merchant.

What You Can Get from Haldor

Although his location is not specific, players would see an icon of an item bag appear on the map once they are within a 2-kilometer radius of Haldor.

The good thing is, once you find Haldor and he has set up his shop, his location will remain the same throughout your game, so it won't be a massive manhunt every time you need an item from him.

Here are some of the wares Haldor offers in exchange for a certain number of coins, courtesy of PC Invasion:

How to Collect Coins on 'Valheim'

As said, you need some coins in order to get the item you need, so you'll definitely need to collect some coins first, which you can get from trolls, chests, and gems.

Chests are found in abandoned buildings and dungeons, while gemstones can be found on dungeons such as the Burial Chamber, which you can then sell to Haldor in exchange for some coins.

"Valheim" is currently a beta title, so there could be changes in the gameplay or settings in the future.

Despite being an Early Access title, "Valheim" is a hit among players and was able to sell three million copies on Steam in under three weeks and was able to become the second most-played game on Steam at one point, as per The Verge, as well as among the top ten games with the most concurrent players on the platform.

ⓒ 2021 TECHTIMES.com All rights reserved. Do not reproduce without permission.
Tags: Valheim Valheim guide how to find Haldor Valheim how to collect coins Valheim Game Guide Survival Games how to get Megingjord belt Valheim Steam Valve
Most Popular