The Chinese electronics giant first teased their new product launch via Twitter on Monday, Mar. 22, but did not reveal much about which products will be unveiled.

On Tuesday, March 23, Xiaomi released an official poster via the Chinese micro-blogging website Weibo, announcing its ambition for the Mi 11 Pro and Mi 11 Ultra to be hailed as the "Android King." 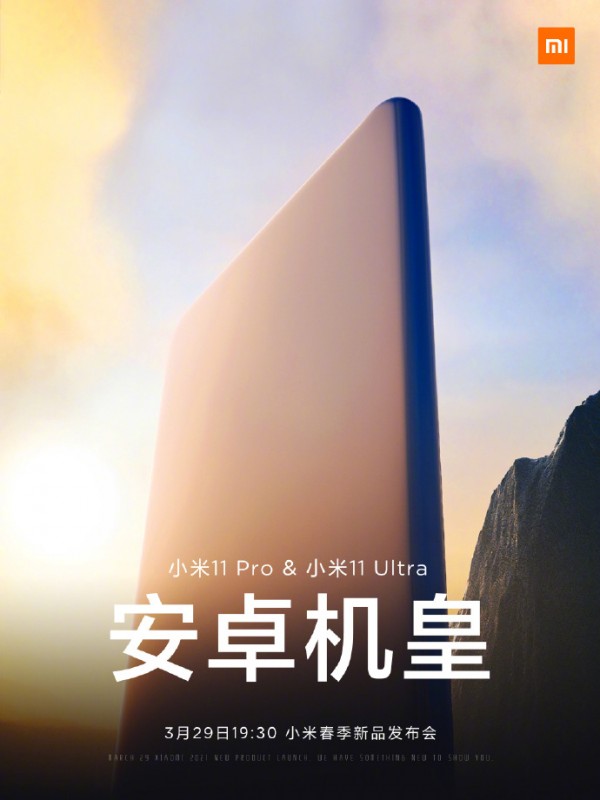 Xiaomi describes their upcoming flagship phones Mi 11 Pro and Mi 11 Ultra, as "thin and lightweight," and both have been certified at 3C with ultra-fast charging - it is 11V at 6.1A, which is a 67.1W rate.

Both phones are also expected to come with a triple-camera setup with a massive camera island and a 50MP ISOCELL GN2 primary sensor with a sensor size of 1/1.12-inch.

The camera setup will have a 48MP ultrawide sensor and a 48MP periscopic telephoto zoom lens capable of zooming up to 120x.

Qualcomm's Snapdragon 888 chipset backed by a 5000 mAh battery will provide power for the flagship phones.

The display has been given an IP68 rating - which allows it to withstand dust, dirt and sand, and water resistance for up to 1.5 meters - as well as a layer of Corning Gorilla Glass Victus.

Perhaps the most surprising feature of the Xiaomi Mi 11 Pro and Mi 11 Ultra is the secondary display located next to the camera module.

The additional display is designed to help a user for capturing selfies and may show various selfie effects.

The price point for Mi 11 Pro and Mi 11 Ultra has not yet been revealed, but it is expected to be revealed during the Mega Launch event.

Mi Pad 5 had been rumored to rival Apple's iPad Pro in terms of display size and will likely be powered by the Snapdragon 870 SoC and MediaTek Dimensity 1200.

The tablet is also rumored to come with a stylus similar to that of an Apple Pencil, hinting that Xiaomi's latest offering may be targeting the high-end tablet-buying market.

Meanwhile, GizmoChina reveals that the Xiaomi Mi Smart Band 6 may resemble its predecessor.

Not much is known about Mi Smart Band 6 at the moment, but it is rumored that it will have support for Blood Oxygen monitoring (SpO2 sensor) and will come with a built-in Alexa assistant.

Related Article: Xiaomi Mi 11 Pro vs. Galaxy S21 Ultra: Samsung's Telephoto Lens to be Featured? Which One is Better?