A Future of Remote Business: How Smart Glasses Can Simulate an Office-Like Experience

After many years of speculation, the COVID-19 pandemic may have pushed us towards a new era of AR and VR use through the medium of remote work - or at the very least pave the way for more mainstream adoption of augmented and virtual reality technology.

23.5 million jobs globally could end up using AR and VR for training, collaboration, or customer service purposes, according to a recent PwC report. 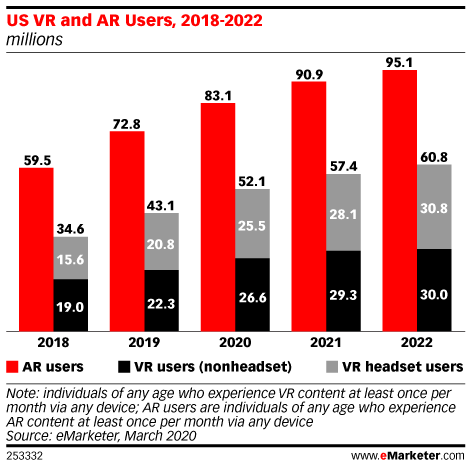 Both AR and VR industries are expanding on an exponential scale - with headset-based virtual reality accelerating ahead of its non-headset counterpart in terms of adoption. Meanwhile, augmented reality adoption will surpass 95 million users in the US by 2022.

The adoption of augmented and virtual reality technology is likely to accelerate further with the development of smart glasses, with the likes of Facebook, Apple, Google, and other key industry players gearing up for releases over the coming months and years.

Companies like Spatial, which has developed technology to create collaborative meetings similar to that of Zoom, but in a more virtual reality environment, has seen its usage figures spike by 1,000% since the beginning of the Coronavirus pandemic, while IrisVR, another immersive software platform but for architecture and planning, has experienced an overwhelming spike in subscriptions. 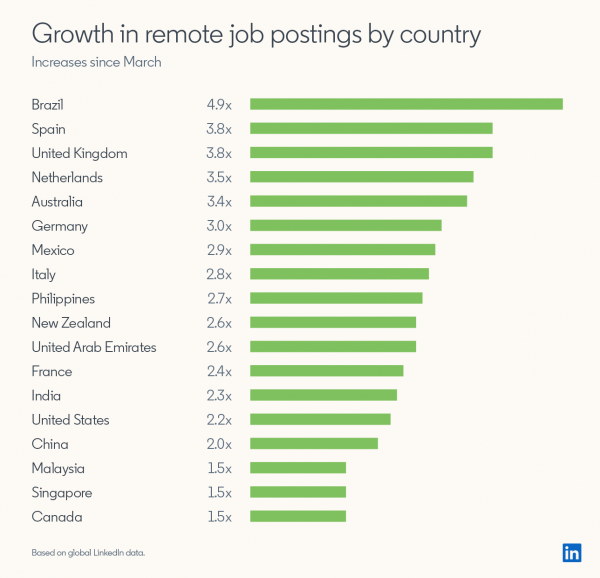 As the data above shows, remote work vacancies are increasing significantly across the world - regardless of region. This will undoubtedly lead to a greater emphasis on the development of collaborative tools to improve the functionality of businesses and the quality of communication between colleagues.

With the smart glasses of tomorrow capable of delivering more immersive digital experiences, let's take a closer look at how the technology could companies to realize the potential of the remote digital office:

Imagine that you're conducting a team meeting to review plans for the forthcoming quarter. Somebody shares a document of last quarter's results for all participants to see, then a colleague shares images from a competitor's advertising campaign. Boards are soon skilled with sticky notes, images, photos, and videos: a productive brainstorming session is in full flow.

This might seem like an office meeting, but the entire meeting space is in fact, virtual, and all the attendees that you're talking to are digital avatars that have been rendered from a single photograph through machine learning.

The virtual meeting scene described isn't some farfetched insight into what a remote office space could look like by the end of the decade, it's actually an already available VR platform developed by Spatial. In its current form, Spatial works through the use of virtual reality headsets, like the ones available on the market from Oculus or AR glasses like Microsoft's Hololens. However, the developers are eager to eventually adapt the technology to work alongside future AR-enabled smart glasses.

"Spatial creates a lifelike avatar that makes you feel like you're sitting next to other people," explained Spatial's VP of business development and strategy, Jacob Loewenstein. "Being in VR became more exciting when people started working from home."

In recent years, tech enthusiasts have been anticipating how virtual reality and augmented reality could soon change the way businesses operate, including using VR technology to walk through 1:1 scale virtual models and utilizing AR to create a room full of computer screens to work on. While companies like Spatial are making some of these use cases a reality, other interpretations of this technology are still years away from becoming a reality.

Despite the huge potential that AR and VR hold for revolutionizing remote work, some significant industry figures have played down the likelihood of the technology being an instant transformative force for offices.

Nikolas Badminton, CEO of Exponential Minds claimed that "if we're working in the hybrid model of people working remotely, that's where this technology can be applied. It won't be a wholesale replacement." However, Badminton also noted that he's "had friends who have worked remotely for the past few months in augmented reality headsets. They've shared virtual spaces and felt the presence of their co-workers. There's a lot of potential to be together in a space instead of rectangles on a screen." 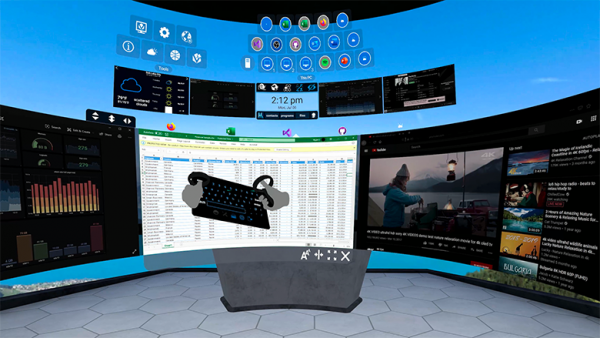 Away from the realm of remote collaboration, AR and VR also have the potential to greatly improve the quality of remote workspaces for employees who are short of home office space.

With technology like vSpatial, users can use Oculus VR headsets as well as Vive, Valve, and Windows MR in a way that provides an immersive experience that combines XR headsets with cloud-based virtual rooms.

vSpatial offers workers to use multi-screened virtual office setups where, in reality, they may not have the room to utilize multiple monitors.

While the current iteration of remote office technology is largely VR-based, the next generation of smart glasses have the potential to convert these setups into more augmented landscapes - offering users more comfort and awareness of their real-world surroundings.

Facebook is soon to release its latest generation of smart glasses which are set to be designed in collaboration with Ray-Ban manufacturers, EssilorLuxottica. While the eyewear isn't set to be released with AR functionality this time around, it shows us how the augmented eyewear of tomorrow will be developed with more comfort, pragmatism, and a lightweight design similar to typical lenses that you can choose at eyewear retailers.

As the decade continues to deliver newer and more advanced wearable technology, the potential for smart glasses could seem infinite, with applications extending way beyond remote office-based use cases. With 75% of adults needing some form of vision correction, and with 64% of these 75% wear glasses, some commentators are even expecting to see AR-based smart eyewear eventually take over from the smartphone as the interconnected gadget of choice in the future, once these can be integrated with the benefits of regular glasses.

Another potentially revolutionary development that augmented reality eyewear can facilitate revolves around the issue of training employees remotely. Because of the importance of getting training right for businesses, this has been a difficult hurdle to overcome in the age of working from home (WFH).

However, there are already plenty of use cases surrounding AR as a training tool. Perhaps most notably, the US Army recently signed a $480 million dollar contract with Microsoft to license their HoloLens 2 technology for training, simulation, and combat purposes.

The military's adaptation of the technology, which has become known as an Integrated Visual Augmentation System, or IVAS, features its own form of night vision and will solely be used for training purposes in its early development.

Away from military use, Mercedes-Benz is also utilizing the HoloLens to visually examine the inside of cars as they're being worked on - tapping into the transparency offered by augmented reality to see details that may otherwise be concealed from view. Here, engineers are capable of becoming more familiar with the complexities of the Mercedes cars than they would otherwise be able to experience using the technology.

Furthermore, AR is building momentum in medical education. Through a partnership between the Cleveland Clinic and Case Western Reserve, health education students can now take a 3D holographic anatomy program that allows users to see virtual cadavers and take a more in-depth look at the human body. This capability can save hours in traditional cadaver labs, according to school officials. Case Western also foresees applications across other fields of education.

In WFH scenarios, smart glasses can pave the way for significantly more engaging and in-depth training programs for remote workers. Employees could not only get hands-on experience of tasks but also use their smart glasses to share their view with their trainers or more experienced employees who can offer guidance and help.

By utilizing AR-enabled eyewear, users could even receive feedback on their training performance in real-time from trainers who would have the ability to superimpose notes and advice onto the field of vision of users.

The Necessity of New Remote Policies

With the development of both augmented reality and virtual reality in workplace environments, it's likely that businesses will need to be ready to counter new avenues for abuse, according to some legal experts. One of the biggest concerns in this area comes in the form of privacy and data issues, but harassment cases may also become more pertinent. In a similar vein in the wake of the internet and email, laws for new technology may need to adapt quickly to keep up with the pace of innovation. While some matters could be easily regulated by current laws, others may need precedents.

Experts agree that privacy is a key concern. David Hoppe, author of Esports in Court, Crimes in VR, and the 51% Attack claimed that "with VR/AR technology we're collecting information that to date has not generally been collected, certainly not on any broad scale. There are legitimate reasons for companies to record physiological responses like eye movement or heart rate from users," Hoppe explained. "For example, a company may want to prevent VR sickness. But that information could also be used to derive psychological responses - gauging sexual preferences, proclivity to violence and degrees of empathy. And that data is very valuable to those trying to reach consumers."

The arrival of AR-enabled smart glasses carried the potential to revolutionize how businesses approach remote work. Immersive collaborative and training environments can be created with ease for colleagues to work with each other as if they're located in a virtual office with near-limitless space.

However, with new technology comes new challenges for businesses. Work culture will need to be adapted to, and guidance will be needed for employees making the shift from a physical working environment to a digital one.

Despite some clear hurdles ahead, the next generation of smart glasses may have been made more significant in the wake of the pandemic. For a new era of remote work, visual escapism may ultimately drive mass adoption - even if it involves digitally transporting users back into the office.