The Microsoft Store has listed the "4 YoRHa" downloadable content (DLC) for the upcoming US release of Square Enix's "NieR Replicant" via the PlayStation 4 and Xbox One platform in late April. The "NieR" series has been on the platform for more than 10 years now, but it has been since limited to a global release as it centered as a Japan-exclusive for the PS3.

The first game remaster called "NieR Replicant ver.1.22474487139" is a remastered version of the original game that was released for the PlayStation 3 from Square Enix, now seeing a global release for two consoles. The PlayStation 4 and Xbox One would be the target recipients, and details are unclear for its backward compatibility or version for the PS5 and Xbox Series X.

"NieR" has been one of the most anticipated games for a long time now, especially as it debuted an action role-playing game (RPG) that has been a massive hit on its release in the Japanese regions. "NieR: Automata" has been available via Steam, but players have received a version that was plagued by bugs and problems, having no solutions until the present.

Read Also: CD Projekt Red Not Giving Up on Cyberpunk 2077: Here's Why

According to Aggiornamenti Lumia via Twitter (@ALumia_Italia), "NieR Replicant's" first DLC was leaked by the Microsoft Store which revealed the game's downloadable content ahead of the April 23 release. The download would be free, giving players the first exclusive content from the game which features premium costumes and weapons to equip. 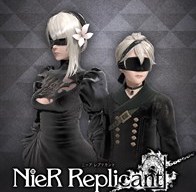 The DLC is listed via the Microsoft store as "4 YoRHa," and is only 1.25 GB in size, taking only a minimal charge on the device's storage once the game releases, along with the extra content. Microsoft said that there would be four costumes and four weapons in total, and all of them hails from "NieR: Automata," which somehow represents a nod to the prior game.

However, since "NieR Replicant ver.1.22474487139 " is a remake of the original "NieR" there are some costumes that cannot be played in the story mode as the "Automata" is a 2017 sequel to the game series. This means that the content coming to the remake would include future items that are not yet available to the "Replicant's" storyline.

'NieR Replicant' Release Date and What to Expect

"NieR Replicant ver.1.22474487139" is the much-awaited remastered version of the original "NieR" game that was released for the PS3 in Japan last 2010. Now, Square Enix is making this available for a global release, and it would come to the platform on Friday, Apr. 23 for the North America and United Kingdom regions.

The game would now be capable to run on Full HD, but there are speculations for its remaster to be capable of higher formats such as the 4K video and high FPS frame rate settings. "NieR Replicant" would debut as a paid game for the PS4 and Xbox One Platform.