'Pokemon GO' Shiny Grimer Spotlight: How to Catch it, Stats, Chances, and MORE

"Pokemon GO" Shiny Grimer Spotlight Hour is up and available, and spawns of the poison-type and sludge Pokemon appears everywhere, as it presents a rare and shiny appearance for a limited time. The Spotlight Hour would only make it available for 60 minutes, but catching the Pokemon is priceless as it cannot be seen or caught at anytime or place.

Grimer has been part of the Generation 1 Kanto Region, alongside the most popular releases of all time, the 151 creatures with Pikachu, Squirtle, Charmander, and Bulbasaur. The sludge Pokemon may have been caught before on countless occassions and different locations, but this is its first in the AR game where it comes as a shiny one.

'Pokemon GO' Shiny Grimer: Can You Catch It? 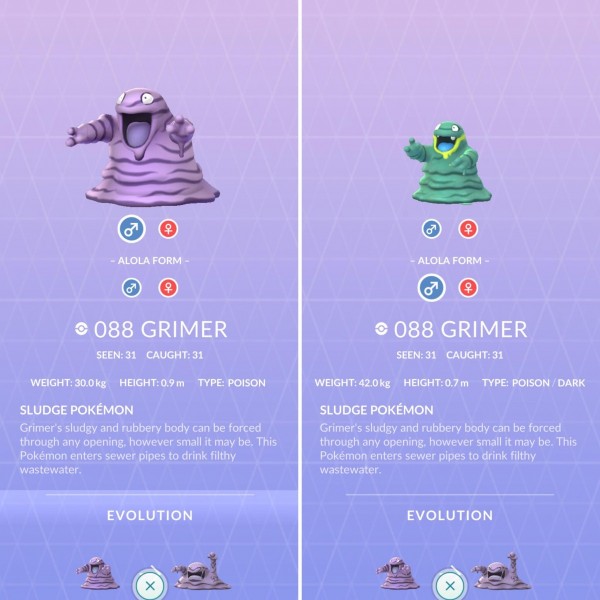 Everybody has the chance to catch Shiny Grimer in "Pokemon GO" and the good thing here is that it would be available almost anywhere, as long as users go out and drive around. However, if they cannot go out during this time of night, they can always use a location spoofer to venture and catch Shiny Grimer in the map.

There may only be a one out of 500 chances to catch him, according to Gamepur, but is guaranteed to show up more during this spotlight hour event.

'Pokemon GO' Shiny Grimer: How to Catch It?

The objective to catching Shiny Grimer is easy, but it might present a difficulty to tame it using a Pokeball as it remains to be elusive and limited for players. Upon encountering one, users should use as much Razz Berry or the Golden Razz Berry to make Shiny Grimer more manageable to catch. Users should also consider the type of Pokeball to use depending on CP.

Moreover, Shiny Grimer may escape or flee after several attempts, so be careful when throwing Pokeballs as only a limited number of chances can be used to try and capture the Pokemon upon encountering. However, do not lose hope if Grimer flees, as it could be found again during the spotlight hour that would occur from 6 PM to 7 PM local time.

The only special stat for Shiny Grimer is its chance to evolve into an "Alolan Muk" which can be obtained by saving enough Grimer candies once out in the wild. There is no need to catch other Shiny versions of the Pokemon to evolve into a special Muk, but it would be cool to have more of the Shiny creature in hand should the CP be low.