Apple Music Will Add Lossless and Spatial Audio -- What Is It and Do You Really Need It?

It is confirmed. Apple Music is about to get two new features that will be a catalyst for better quality sound in Apple's devices. The company announced that lossless audio and spatial audio via Dolby Atmos is coming, in June, for free to subscribers.

Spotify, on the other hand, also previously announced their lossless audio subscription tier. However, the Spotify HiFi is priced a bit higher than the usual Premium tier. Its launch date has not been known to the public yet. 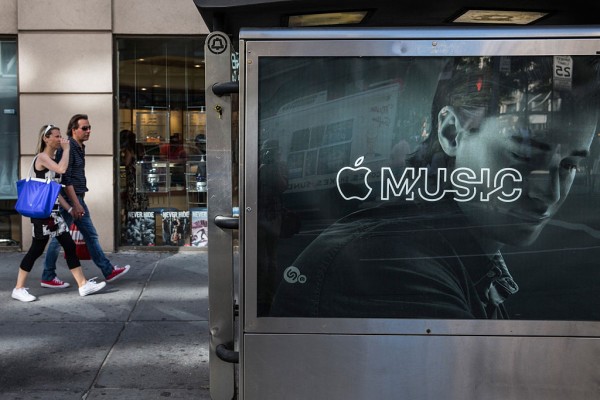 (Photo : by Andrew Burton/Getty Images)
NEW YORK, NY - AUGUST 07: An advertisement for Apple Music is posted on the streets of Manhattan on August 7, 2015 in New York City. After launching in June Apple announced it has attracted 11 million users during its trial period.

Unlike Apple Music's rival, the lossless music will be available to the subscribers of its basic tier. It means that new features are coming to the current subscription plan of the app's users. The lossless audio will be among the quality options in the settings.

Moreover, Apple added in its announcement that its entire music library of a whopping 75 million songs can be enjoyed by its subscribers at an immense higher quality by the next month.

It is despite Deezer and Amazon's existing offering of lossless audio in its music subscription apps. The latter, as Apple announced its new features, consequently lowered its price for Amazon Music HD to $9.99, Billboard first reported. The said price mirrors Apple's basic plan.

At the same time, spatial audio, as reports have been hinting, will also be enjoyed by Apple Music subscribers by default on any device with Dolby Atmos. If you're currently under the Apple ecosystem, its recent devices such as the iPhone, iPad, and Mac supports this. Also, its accessories, particularly, the AirPods and Beats headphones would be able to enjoy the new feature.

Spatial Audio, on the flip side, will only be available for "thousands of songs," Apple revealed. Users may have to wait as some song will have to be remastered for the new feature.

What is Lossless and Spatial Audio and Do You Need This?

Due to streaming and even back when device memory is limited, audio files have to be forcibly compressed. And it sounded crappy.

Lossless audio, in contrast, is CD-quality streaming at a rate of 16bit at 44.1 kHz. It is the quality that people behind the production of songs want people to hear. Apple Music will have it up to 192 kHz -- which could weigh at around 250MB per song.

Unfortunately, TechCrunch reported that to experience the new audio feature, users will have to use a USB digital-to-analog converter. Any AirPods model could not be used, as Bluetooth could not transmit the new audio tech, Apple Insider reported.

As for spatial audio, it will be great for replicating a cinema experience. Contrary to stereo, which only sends out audio from left and right, the new feature will send out audio waves seemingly from your front, sides, and rear.