Wrong Leg Amputated: Austrian Clinic Admits to Amputating a Patient's Right Leg Instead of the Left

A treatment turns into a tragedy after doctors amputated the wrong leg of a patient. The "tragic" mistake has left a gruesome memory for the 82-year-old patient who lost his right leg.

Reports say that the elderly man has undergone surgery only to wake up and witness an irrevocable human error committed by doctors in an Austrian hospital. Instead of his left leg being removed as soon as possible, his well-functioning right leg was mistakenly amputated.

How Did The Austrian Clinic Accidentally Operate the Right Leg? 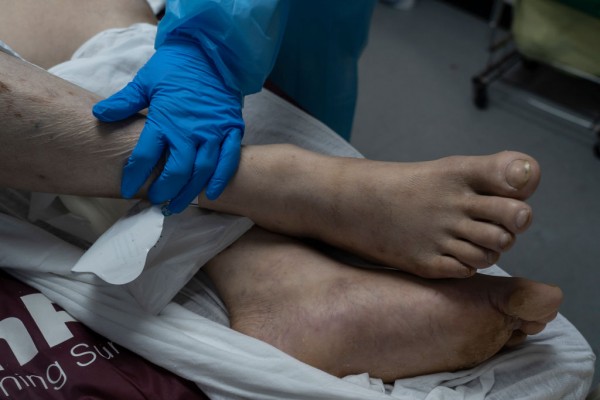 (Photo : Go Nakamura/Getty Images)
HOUSTON, TX - NOVEMBER 10: (EDITORIAL USE ONLY) A medical staff member holds a patient's legs who is suffering from coronavirus in the COVID-19 intensive care unit (ICU) at the United Memorial Medical Center (UMMC) on November 10, 2020 in Houston, Texas. According to reports, COVID-19 infections are on the rise in Houston, as the state of Texas has reached over 1,030,000 cases, including over 19,000 deaths

On Tuesday, May 18, doctors in a clinic in Austria confessed to their error after they amputated the wrong leg of an old man in the Austrian town of Freistadt. The untimely mishap has brought more harm than good to be patient who only hopes to eliminate his diseased body part.

According to Global News posted on Friday, May 21, the elderly patient has a history of many illnesses, which have paved the way for the doctors to come up with amputating his affected leg. If the unhealthy leg would not be cut soon, there is a chance that his healthy leg will be infected as well. The amputation has been agreed upon with the family of the patient and the health experts.

However, the worst part of the surgery has left a lot of questions to the patient's family after the doctors mistakenly removed the right leg instead of the ailing left leg.

In a statement released on Thursday, May 20, the Freistadt Clinic said that human error is to blame for the accident that caused a lot of trouble to the old man and his family.

Read Also: Woman Decides To Have Her Leg Amputated Years After Snapping It In A 'Freak' Accident

"We are deeply shocked that on Tuesday, May 18, despite quality assurance standards, the wrong leg of an 82-year old man ... was amputated," the Austrian clinic stated.

The management added that the unforeseen case of the wrong amputation was a result of the unfortunate circumstances that happened during the clinical operation.

Wrong Leg Amputation Got at a Wrong Time

In a continued response to the tragic mistake, the Freistadt clinic said that the erred scenario happened prior to the operation, specifically during the time of marking the leg that needs to be amputated. At that time, the doctors had already sliced the amputee's leg in the mid-thigh.

According to the clinic staff, who were the first to witness the miscalculation, they first noticed it when they replaced the bandages of the patient on Thursday morning. However, instead of being greeted with good news, the elderly patient woke up to see that his right leg was already cut off.

At present, the investigation of the incident continues. Moreover, several assessments will be reviewed so that next time, the error won't happen again. The clinic granted psychological help to the patient and his family, Euro News reported.

The Patient Will Undergo the 'Proper' Surgery This Time

The elderly man will have to deal with losing both of his legs in the next process since the operation for his left leg will start after a few moments. There was no financial compensation mentioned by the clinic for its committed error.