'Elder Scrolls Online:' What to Expect for the Next-Gen Upgrade of this Game in PS5,Xbox Series X|S

"The Elder Scrolls Online" comes in the next-gen consoles to thrive in the gaming community. The long-running survival game of Bethesda has raised the bar this time since players have been eyeing many improvements as it comes to a stylish PS5 and Xbox Series X|S gaming.

For this part, we are also giving you a chance to see the Blackwood expansion in Oblivion. Find out what massive upgrades have entered the game.

'The Elder Scrolls Online' Console Enhancements You Should See 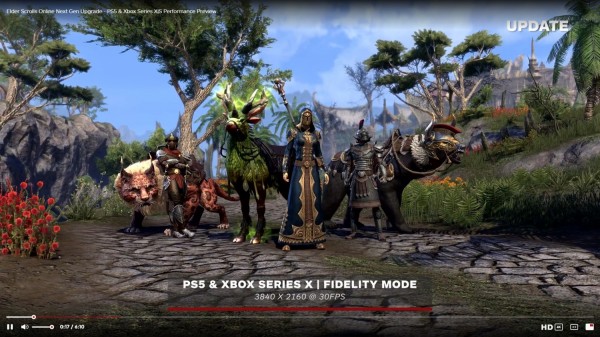 According to IGN's performance review of the game, players could expect a lot of major revamps that they would meet in-game For those who are running the next-gen consoles in fidelity mode (3840 x 2160), you could get 30 fps while if you run PS5 and Xbox Series X in 2560 x 1440, you could run into 60 fps.

For the console improvements that you are expecting, here are they:

In the first video flashed by the game insider, the updated version looks sick through its well-developed anti-aliasing. It is evidently seen in the "net" where only a little light shimmers in the next-gen consoles. 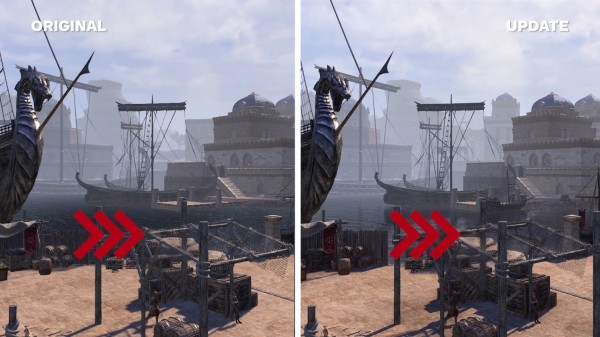 (Photo : IGN via screenshot )
Difference in anti-aliasing in ESO's old and next-gen console.

The second video tackles the terrain's improved texture in addition to the enhanced shadow and more fog. Most likely, "The Elder Scrolls Online" is aiming to optimize the gamer's experience through irreplaceable graphics and smooth gameplay. The realistic renders would really fool the player into knowing that the place truly exists in real life.

As per ESO's lead graphics programmer, Alex Tardif, the team was thrilled about what they did to the game. In terms of the plainer reflections, the video game publisher selected it despite the expensive rendering. Tardif said that it really paid off in terms of the raw design and beauty of the in-game elements.

For instance, there is a video in the preview that shows a running animal near a river. The water's simpler reflection displayed the hyper-realistic colors of the animal reflections especially when it is eating its food. Also, the raw distance of the building is seen in a clip where even the miniature details of the rocks can be discerned.

Tardif continued that their engineers made their best to make an underlying rendering that will take the breath of the ESO players. For what it's worth, the next-generation improvements deserve to meet the high-spec consoles.

For years, ESO has been doing a lot of impressions among players even though its previous versions are already outdated. It does not matter in the online mode since many expansions are made for the game to be "endlessly playable" through the decades.

Future Five reported that the magical island is up again for a challenge through the eyed arrival of the contents including new quests, characters, storylines, locations, and items.

The multiplayer RPG reminisces another breath of fresh air through the Oblivion path. New gamers could immediately purchase the "The Blackwood Collection'' which also lets you enter the previous worlds of Greymoor, Summerset, Morrowind, and Elsweyr.

Furthermore, you could also befriend another player through the new buddy system in the game. This is a great start for solo players who have a hard time playing "The Elder Scrolls Online." In similar ways to your animals, a friend could distract an enemy for you to penetrate their defenses.

As expected, Bethesda won't let ESO be instantly dead amid the surge of the next-gen games. The classic RPG is returning with a bang for the fans, and for those who are new to the game, freely roam its open-world to search for the most unexpected things in the vast magical kingdom.

The next-gen upgrade would come on June 15 in both PS5 and Xbox Series X consoles.