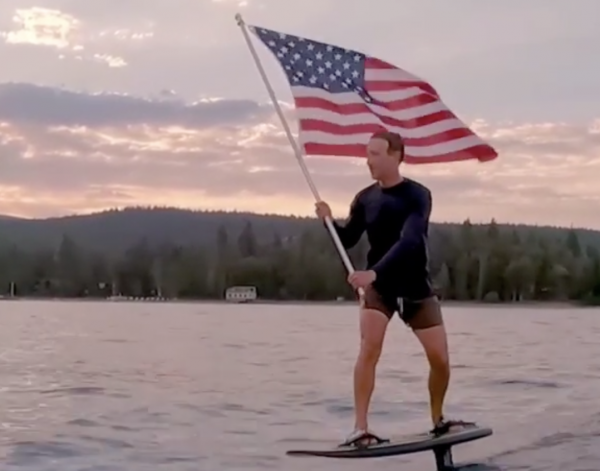 All of this is happening, while a song by the late John Denver's "Take Me Home, Country Roads," was playing in the background.

A lot of celebrities and known internet personalities have shown their love for their country by posting earlier today, to commemorate the 245th day of Independence of the country from Great Britain's colonization. One of which is Facebook CEO and co-founder, Mark Zuckerberg, which showcased his skills of surfing while and multitasking on the board.

The CEO seems to have been riding the popular electric surfboards which do not need massive waves to gain momentum and move with the flow on an ocean. This resembles that of the Lift EFoil surfboard, or it might be the same device, used by the surf-loving and enthusiast Zuckerberg, which he posts most of the time.

Zuckerberg's Independence Day post shows that he is already a master of the electric surfboard, especially as he holds a flag while doing it, showing his mastery and love of the country at the same time.

Read Also:  [Look] Mark Zuckerberg Names His Goats Max and Another One Based on Cryptocurrency

It goes without saying that some people would love it and some people would hate it, especially when it comes to online personalities and their sharings. In the recent post of the Facebook CEO, he has been met with mixed reactions full of amazement over his skills, and bashers which mock what he showed on his Instagram profile.

What most of the bashers have talked about is that they referred to the CEO as a "robot" or "AI" (artificial intelligence), saying that "robots can surf." This is related to the conspiracy theories that Mark Zuckerberg is deceased, and that what has replaced him is only a robot or a reptile clone that resembles his likeness.

Some users have gone as far as saying that the Facebook CEO "destroyed America" with his post.

Mark Zuckerberg has also been the subject of numerous memes in the past, and one of his most popular mockeries was that of the "sunscreen surfer," where he covered his face with a thick layer of lotion. The CEO resembled that of Feudal Japan's "Geishas" or female entertainers who covered their faces with white makeup.

In the recent Independence Day post, a user said that this post was "meme material," and in the coming hours or days, this is something to look forward to, especially with the flag surfing post.