iPad Pro will also sport the Mini LED on its 11-inch model release in 2022, as per Ming-chi Kuo, an Apple leaker, and analyst. It comes after the 12.9-inch model flaunted the new screen for this year's release. 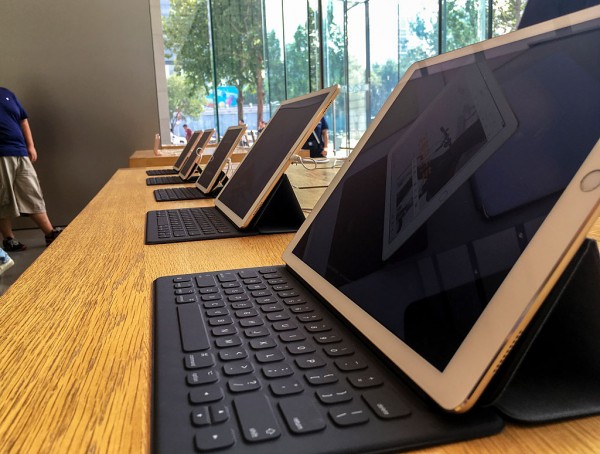 (Photo : by Zhang Peng/LightRocket via Getty Images)
BEIJING, CHINA - 2016/07/27: IPad Pro on table in an Apple shop. As Chinese smartphone makers offer better products, sales in China fell 33% to $8.8 billion in the 2nd quarter, compared with 112% growth a year earlier.

Apple unveiled the two new iPad Pros powered by an M1 chip last April 24. The release came a few months after the Silicon chip of the Cupertino giant debuted on the MacBook Air, MacBook Pro, and Mac mini devices way back in November 2020.

Alongside the new Apple-made chip, the iPad Pro also introduced the Mini LED technology to its lineup. However, only the larger and top-of-the-line variant flaunted it during its release.

Now, respected leaker, Kuo, noted via MacRumors that the smaller 11-inch model is also getting the new technology.

In hindsight, the Mini LED tech is a radical innovation that packs the screen with numerous tiny LEDs, which produces contrast and HDR performance improvement, as per The Verge. The local dimming zones is behind the advancement.

Additionally, it is to note that the 12.9-inch iPad Pro sported a total of 2,500 dimming zones for its screen. Meanwhile, the specifications of the next iteration for the 11-inch model in 2022 have yet to surface.

The latest information came from an investor note that included Kuo's revelation that the news outlet has stumbled upon.

Meanwhile, Kuo via 9to5Mac also revealed that Apple is ramping up its investment for Mini-LEDs as it plans to transition its devices to the new screen tech.

As such, Apple has allocated a whopping $200 million to ramp up the production of Mini LEDs, at least for the next MacBook Pro. Additionally, Mini-LEDs are known to be more expensive than OLEDs. So, it is no surprise that Apple provided the new tech exclusively to the higher-end iPad.

However, if the latest pronouncements of Kuo are to be believed, even the slightly cheaper variant of Apple's Pro tablet will finally sport it as well.

The famed Apple analyst also claimed that the upcoming iPad Pro is not getting a bigger screen, contrary to reports saying that a 14 or 16-inch tablet is in the works.

It is to note that the next generation of iPad Pro continues at its 11 and 12.9 inches sizes, based on Kuo's claim. The analyst further noted that the non-pro tablet models, such as the iPad and iPad Air, are getting OLEDs for its next release.

Related Article: The New iPad Pro (2021) Leaks Reveal Triple Array Camera and Processor As Powerful As What Macbooks Use