The first moon-forming disk around an exoplanet has been spotted and measured by astronauts with the help of a telescope array called ALMA.

Myriam Benisty, a researcher at the University of Grenoble, France, and at the University of Chile who led this research into the moon-forming disk said as quoted in a press release posted by the European Science Observatory (ESO), "Our work presents a clear detection of a disc in which satellites could be forming."

The research on the exoplanet with the moon-forming disk has been published in The Astrophysical Journal Letters.

The exoplanet with the moon-forming disk is located outside the solar system. Known as the PDS 70c, the exoplanet is located around 400 light-years away from Earth. One light-year is equivalent to 6 trillion miles.

Scientists have previously found hints that suggest a moon-forming disk is present around the PDS 70c, but the surrounding environment made it difficult to determine its presence.

First Moon-Forming Disk Around an Exoplanet: What Astronomers Found Out 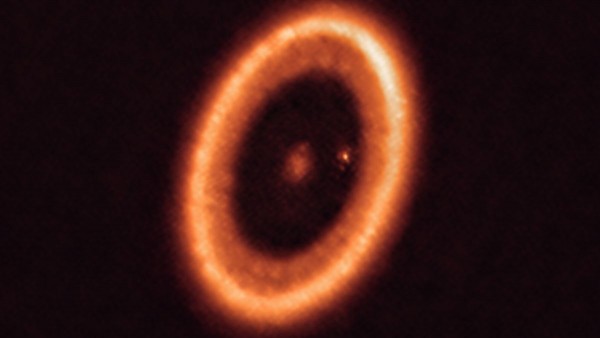 The first moon-forming disk around an exoplanet that astronomers spotted is a circumplanetary disk, per the ESO press release.

According to Space, the moon-forming disk is "about 500 times larger than Saturn's rings." The report also describes the planet PDS 70c as "Jupiter-like."

The diameter of the circumplanetary disk has been found to be around the same distance between Earth and the sun. Researchers have also discovered that the moon-forming disk contains enough material that can form around three satellites.

The measurements that researchers were able to do of the first moon-forming ever spotted around the exoplanet is possible thanks to a telescope array called the Atacama Large Millimeter/submillimeter Array or ALMA. ALMA is located in the Atacama desert in northern Chile.

According to a separate report by Space, ALMA "studies the universe in certain radio wavelengths that range from millimeter to submillimeter wavelengths." It has the capacity to examine things that are not easy to see in visible wavelengths such as planetary systems still in the process of forming.

The National Aeronautics and Space Administration (NASA) has referred to ALMA as "the most powerful observatory in history," according to the Space report. Last April, ALMA discovered a rotating baby galaxy.

How Planets and Moons are Formed Remains a Question

According to ESO Research Fellow Stefano Facchini, another researcher involved in the research on the moon-forming disk, "It is still unclear when, where, and how planets and moons form."

Astronomers have theorized that planets are formed "in dusty disks around young stars," according to the Space report. Researchers hope that the study on the first moon-forming disk found around an exoplanet will give more information about how the process happens.

Scientists hope that they can revisit the PDS 70b and PDS 70c using what is called the Extremely Large Telescope that is currently still being built.

Also Read: Earth's Moon May Have Formed From Multiple 'Moonlets' That Merged

[VIDEO] Astronomers Show What Could Be The Birth of an Exoplanet

Earth's Moon May Have Formed From Multiple 'Moonlets' That Merged