Most of the updates for Summoners War: Lost Centuria — now available on the Apple App Store and Google Play Store — revolve around a range of special 100th Day Anniversary events in honor of the massive real-time strategy mobile game's anniversary, from daily log-in rewards to limited events.

Additionally, summoners will now have access to two new Monsters: Scarab and Belladeon to enlist in their ongoing quests. Lost Centuria will also feature a brand-new esports-like content called the "Good Will Contest." 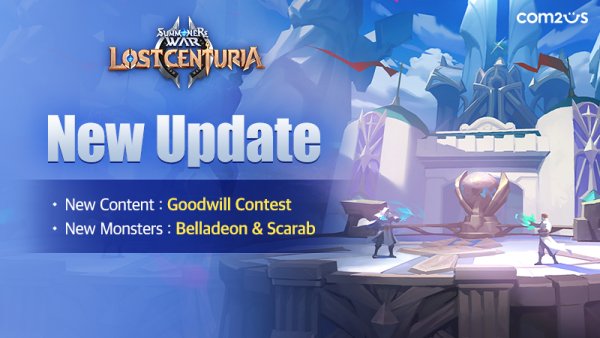 In the new Goodwill Contest, users are now empowered to create their own contests, setting the battle conditions within and inviting their fellow summoners to participate. Options are given to configure different aspects of the contest such as battle mode, number of participants, the monster level requirements, before sharing the contest for other users through the public chat. Additionally, organizers of a Goodwill Contest can also create matches and specifically choose and invite the players who will be joining.

With its Goodwill Contest, Com2uS also plans to speed up the growth of budding esports communities by giving them the power to organize events themselves, while allowing spectators to view and enjoy these events. To step up its strategic gameplay, the new Goodwill Contest feature also includes a Ban and Pick mode.

A Goodwill Contest trailer has been released a month prior to its release, available on the Summoners War: Lost Centuria YouTube Channel.

Players also get to meet Scarab and Belladeon in the new update. Scarab is a fire-type Hero Monster, the first original monster from the Lost Centuria spin off, and is a Defense-type monster that boosts defense with his DEF Up and Fortification effects. The Fortification effect continues to inflict damage to the attacker while Scarab recovers his hit points. The next one is the Light incarnation of Inugami, a popular monster from Summoners War: Sky Arena, arriving as Belladeon. The second monster has a skill that recovers not only himself, but all allies.

Both Scarab and Belladeon are teased in a promo video available on the same YouTube channel.

Also, the new update will include a new time: the "Glory Token Doubler," which allows players to earn the same amount of Glory Medals when they convert Glory Tokens into Glory Medals.

For its 100th Day Anniversary,  Summoners War: Lost Centuria will be debuting a host of events to celebrate the occasion starting on August 6, including the following activities:

'Final Fantasy VIII Remastered' Finally Available on Android and iOS for $16.99 for a Limited Time