The Moons in the Solar System and the Scientists, Telescopes That Discovered Them

Most major planets have them (except for two, which you'll learn about in a few). Some dwarf planets like Pluto have them. Even asteroids have them.

This article dives deeper into the moons in the solar system, including the scientists and the telescopes that have discovered them through the years.

Moons in the Solar System: What is a Moon Anyway?

A moon has been defined by the National Aeronautics and Space Administration (NASA) as a natural satellite that "probably formed from the discs of gas and dust circulating around planets in the early solar system."

The moons in the solar system come in different types, shapes, and sizes, but they usually have solid bodies. They are usually named after mythological characters from different cultures. An exception to that are the moons of Uranus, which are named after Shakespearean characters or those from the poetry of Alexander Pope.

The Moons in the Solar System

On the flipside, both Mercury and Venus have no moons. Earth, as we all know, only has one.

Here are some of the 200 moons present in the solar system, along with the scientists and the telescopes that have discovered them:

Deimos: Named after the Greek god who is the brother of Phobos, Deimos is one of the two moons of Mars. It was discovered by American Astronomer Asaph Hall. As you might have already guessed, Mars' other moon is named after Deimos' brother. 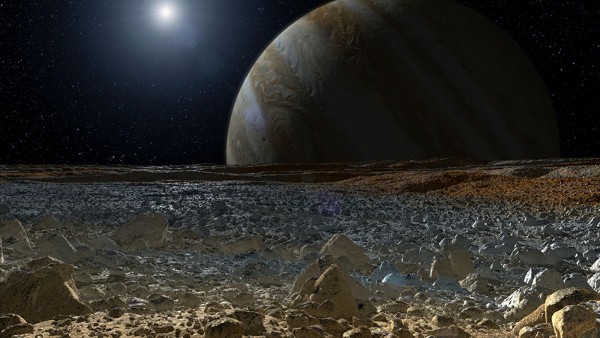 (Photo : NASA/JPL-Caltech)
An artist's illustration of Europa's surface. An internal investigation found that NASA's Europa Clipper and Lander, two upcoming missions, faced several problems. The investigators found that both projects suffer from budget and schedule issues as well as a shortage of staff.

Europa: Europa is one of the 79 moons of Jupiter named after the woman Greek god Zeus (known as Jupiter in Roman mythology) abducted. It was discovered by Galileo Galilei in 1610 using a refractor telescope.

Ganymede: Ganymede is Jupiter's largest moon and named after a male lover of Zeus/Jupiter. Like Europa, it was discovered by Galileo Galilei in 1610.

Io: Another moon belonging to Jupiter, Io is named after the priestess who became the lover of Zeus/Jupiter. Like Europa and Ganymede, it was discovered by Galileo Galilei in 1610. 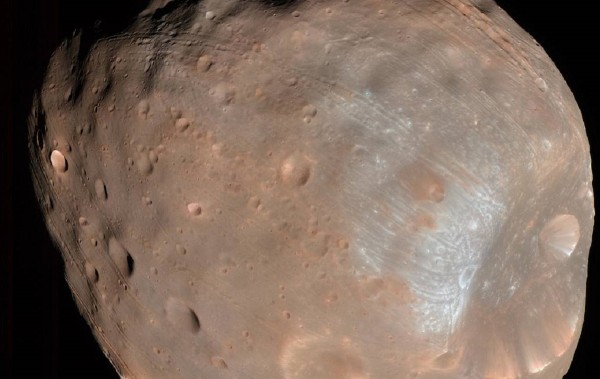 (Photo : NASA)
Mars Curiosity Rover captured two solar eclipses on the Red Planet. The eclipses briefly darkened the light, and the moons Phobos and Deimos only appeared as black blobs across the sun's surface.

Phobos: The larger one of Mars' two moons is known as Phobos, after the Greek god of fear and panic. According to an article by Space, Phobos was discovered on August 17, 1877, by American astronomer Asaph Hall using a refractor telescope.

Related Article: Mars Once Had A Third Moon Accompanying Phobos And Deimos

Titan: Titan is the largest one of Saturn's 82 moons. Named after the mythological giants known as titans, Titan was discovered by Dutch astronomer Christiaan Huygens in 1655 using a telescope he built with his brother.

Titania: Uranus has 27 moons and the largest one is named Titania after the queen of the fairies in William Shakespeare's "A Midsummer Night's Dream." Titania was discovered by British astronomer William Herschel in 1787.

Triton: Neptune's largest moon, Triton was discovered by English astronomer William Lassell in 1846 with an aperture metal mirror reflecting telescope he built himself. Triton is named after the Greek god of the sea, who is the son of Poseidon. 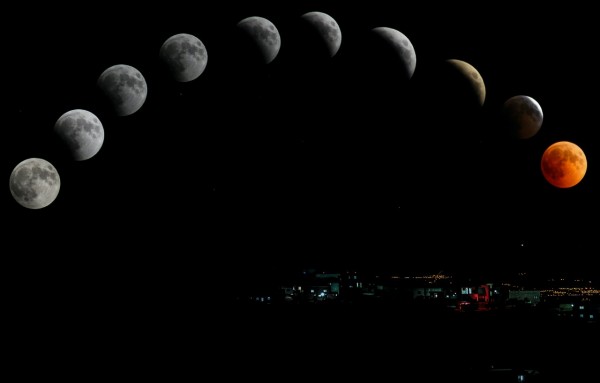 Wondering why the Moon is simply called "Moon?" According to NASA, before Galileo Galilei discovered the moons of Jupiter, people simply thought that the Moon was the only moon in the solar system.

How The Moon Affects Tides

Mars Once Had A Third Moon Accompanying Phobos And Deimos

NASA to Visit Neptune's Moon Triton in Next Mission