Besides the signature of the late Cupertino giant icon, an investor in the company, Mike Markkula also signed it. 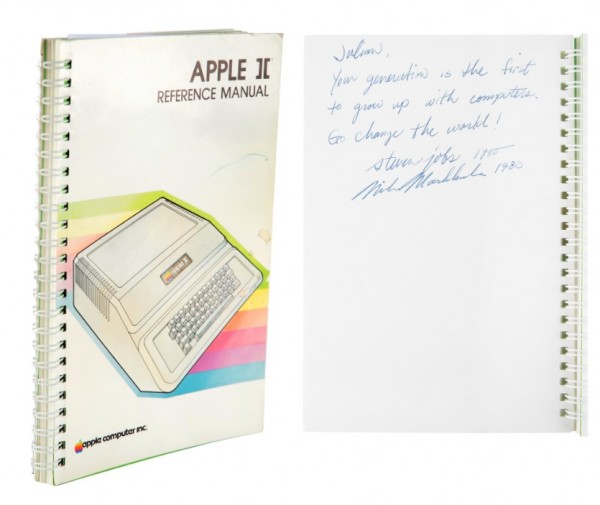 According to an updated report by CNN on Sunday, Aug. 22, the 196-page company manual has been sold for nearly $800,000 in an auction spearheaded by RR Auction.

The signed book contains an inscription that reads "Julian, Your generation is the first to grow up with computers. Go change the world! steven jobs, 1980."

In a statement of the auction house, RR Auction, the Apple promotion was underway during the time of manual signing.

Both Jobs and Markkula were in the UK for the event.

The "Julian" who was mentioned earlier was Julian Brewer, a son of an Apple entrepreneur who was tasked with product distribution in the United Kingdom at that time.

According to Brewer, he was summoned by his father when he was busy writing games in his Apple II. He grew amazed upon meeting Markkula and Jobs.

He added that the inscription has been made more memorable through its unusual signatures from prominent people.

Apple II was a known product that Apple created in 1977. The Cupertino firm considered this as one of the most successful launches in the history of selling.

In line with the Apple auction, RR Auction praised the Apple II, which was regarded to have changed the world in the field of computing.

In another report by MacRumors, the Boston auction house also offered Steve Job's famous letter bearing the symbolic "I'm afraid I don't sign autographs" message. It was sold for $479,939.

Meanwhile, another Apple computer owned by Roger Wagner hit a staggering price of $464,876 while the signed Macintosh motherboard garnered $132,049.

If you are looking for another Steve Jobsmerchandise, another signed copy of Macworld #1 was bought for $201, 021. It was also signed by Steve Wozniak.

Jobs has also a vintage leather bomber jacket that he donned in 1983. Later, one buyer purchased Job's photo wearing it for $66,466.

The world of NFT continues to expand and many fans have been hooked by the blockchain craze.

Last month, the NFT version of Jobs' handwritten job application was sold for $1,209.75. Its original copy reached $35,000 for the highest auction bid.

Related Article: How Much Does an Apple Vintage Sign Cost? Auction Started Bid at $12,000 for Classic Logo