iOS 15: How to Bring Safari’s Address/Search Bar Back to Top of the Screen

iOS 15 updated the Safari address/search bar below the interface, but some find it awkward to use. So, here is how to bring it back to the top of the screen. 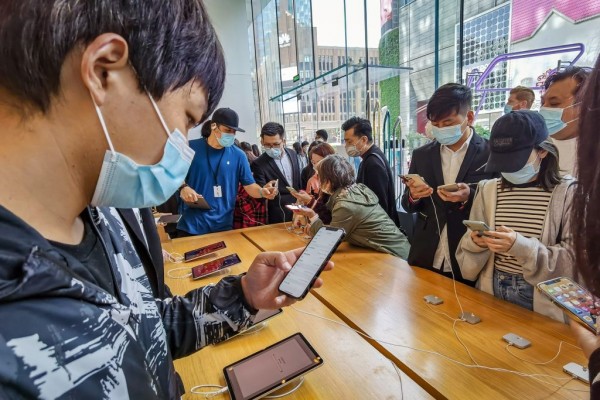 (Photo : by STR/AFP via Getty Images)
People try out the new iPhone 12 mobile phones at an Apple store in Shanghai on October 23, 2020.

The iPhone maker introduced the new look of Safari during the release of the iOS 15 Beta 6, which came out alongside the iPadOS 15 Beta 6.

Apple's latest iOS update included a tweak that no one even asked for. The all-new Safari interface now has the URL bar at the bottom of the screen by default.

According to LifeHacker, Apple attempted to make the design change not because they are merely bored--there is a logical reason behind it.

The iPhone maker is trying to fix a problem rooted in the ever-increasing sizes of smartphone displays. Apple seeks to make the search bar easier to tap by placing it below the screen.

However, some users are not yet ready to throw away their habit of reaching for the URL bar on top of the screen as the top browsers sport it that way.

That said, it is worth noting that there is still a way to move back to its classic look, as per 9to5Mac. Although, the option to revert it is hidden in the settings of the built-in browser.

It does suggest that the Cupertino giant knew that some users will not be a fan of the new radical design change, based on the availability of the option to bring it back, despite not making it obvious.

How to Bring Safari's Address/Search Bar Back to the Top

If you are already using Safari on the iOS 15 Beta 6, here is how to move the address/search bar to where it used to sit.

And that's it, the address/search bar of Safari should be back to where you are used to seeing it on iPhones.

Meanwhile, on top of the search/address bar move, the iOS beta update further focused on the SharePlay function of FaceTime, improving video watching and music listening while screen sharing.

What's more, the spotlight now provides better search results. Not to mention that the Photos app welcomed an improved experience with the new "Live Text" feature.

Elsewhere, here's how to stop Apple's new CSAM Detection on iOS15 and iPadOS 15 from scanning your iPhone or iPad photos before its starts doing so.