One of the Lucy spacecraft's solar arrays "may not be fully latched," according to a tweet from an associate administrator from the National Aeronautics and Space Administration (NASA).

NASA's Associate Administrator for Science, Thomas Zubuchen, has assured everyone that the spacecraft, which is on a 12-year mission, is "safe and stable."

The Lucy spacecraft was successfully launched to space on October 16 to begin its mission to study the Trojan asteroids in Jupiter. The spacecraft will first do two flybys of Earth in order to build its momentum for the trip to Jupiter.

The first of Lucy's eight asteroid flybys will take place in April 2025, and the last flyby will happen in March 2033.

After the Lucy spacecraft was successfully launched on October 16, NASA discovered that one of its solar arrays was not able to secure itself fully.

While assuring that the spacecraft is safe and also stable, NASA's Associate Administrator for Science Thomas Zubuchen said in a tweet posted on his personal Twitter account that its "two solar arrays have deployed, but one may not be fully latched."

Zurbuchen also said that the team behind the Lucy spacecraft is identifying what should be done next.

According to a report by Space, NASA has emphasized that Lucy is not in "any immediate danger." The space agency has also said that both solar arrays are able to produce power, and the spacecraft's battery is also charging. 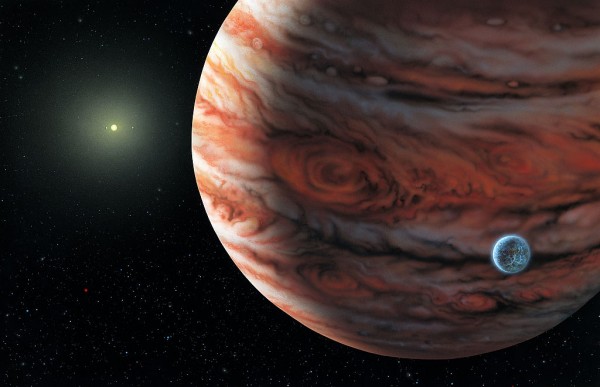 (Photo : by Lynette Cook/NASA/Getty Images)
IN SPACE - JUNE 13: This artist's conceptual drawing released June 13, 2002 depicts a Jupiter-mass planet orbiting the star, 55 Cancri, about 41 light years from Earth. A possible moon around the planet is shown because such moons are thought to be common around this type of planet, but no moon has been detected.

The Lucy spacecraft is currently on a 12-year journey to study the Trojan asteroids in Jupiter to help scientists understand how the solar system came to be.

Before all of that, the Lucy spacecraft's first task is to do two flybys of Earth to build up its momentum before heading for Jupiter.

Per a previous Tech Times report, the spacecraft is actually carrying a disc made from lab-grown diamonds as a nod to the song by The Beatles, "Lucy in the Sky with Diamonds."

Also Read: NASA Lucy Mission's Saturday Launch: Facts That You Might Not Know About the Space Activity

NASA Lucy Mission's Saturday Launch: Facts That You Might Not Know About the Space Activity