#TechTimesLifeHack: Podcast Newbie? Tech Essentials You Should Have Before You Start Podcasting

Podcast newbies are sometimes taken aback from starting their podcasting project as they do not know where to begin. 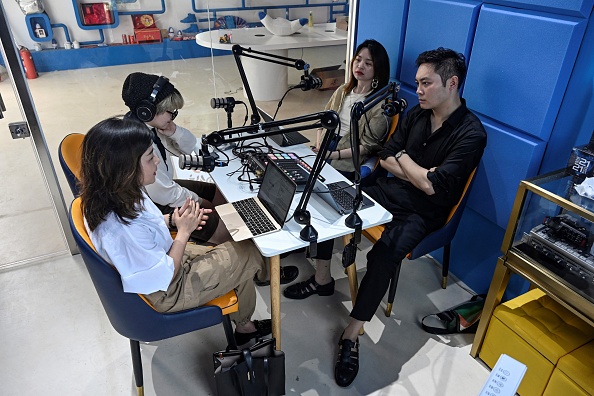 (Photo : by JADE GAO/AFP via Getty Images)
This photo taken on May 22, 2021 shows three hosts of Chinese podcast "The Weirdo" recording an episode with their sound editor in a studio in Beijing. - A lesbian coming to terms with her sexuality, a village covering up abuses and a dissection of the three-child policy -- an explosion of Chinese podcasts are wrestling with social issues in ways unlike the state-filtered media.

However, one of the first things that need to be finalized before venturing into the world of podcasting is the tech essentials that you will need to have.

Podcast Newbie: How to Start One

Although podcasting actually starts by choosing the topic of your content, part of the overall process still includes recording and editing the audio, as per Podcasting Insights.

Not to mention that the intro and outro audio, as well as the cover of the podcast also needs these gadgets too.

That said, essential gadgets that will be used for both recording and editing the final product of the podcast needs to be ruled out in the beginning.

The world of podcasting has grown in terms of creators and listeners over time, attracting tech giants like Spotify and Amazon.

According to Learning Times, the word podcast comes from the combination of two things: Apple's iPod and the term broadcast.

So, it turns out that the now lucrative world of podcasting emerged from the fame of Apple's music device back then called the iPod. It was before listeners preferred accessing their music from the massive libraries of streaming platforms.

Nevertheless, despite its roots in Apple's iPod, Spotify claimed that it has already surpassed Apple as the top podcast provider, at least in the United States last Oct. 18.

So, if you're planning to join the vast world of podcasting, here are some of the tech essentials that you should consider having before anything else.

First and foremost, of course, to start recording a podcast is to cop a good microphone, as per Entrepreneur.

Having one not only prevents having any untoward issues during the recording. It also helps attract more listeners as they can clearly hear what they are listening to.

Although your laptop or smartphone has a built-in mic, it would not be as good as a mic that you would buy separately.

The next tech essential tech needed in podcasting is a pair of headphones.

Unlike the microphone, headphones for podcasting do not have to be the best out there, which even sports the top-of-line noise-canceling features and wireless design.

It should at least let you hear what you or your guests are saying properly.

Although this one is not necessarily needed to start a podcast, having a pop filter will help your voice to sound more appealing to your listeners.

Pop filters are usually seen being used when music artists are recording their songs, but it works fine for podcasters as well.

Not to mention that pop filters could be bought for a really cheap price online. Yet, it provides better speaking audio that your audience will surely enjoy.