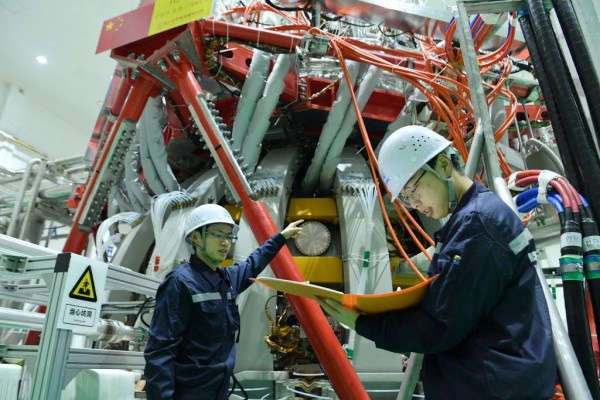 China's artificial sun could possibly outshine our own sun after reports have stated that the fusion reactor just got five times hotter, setting a new personal and world record.

Scientists are celebrating this moment because it means the world is now one step closer to creating a source of clean energy that is entirely limitless.

In 2003, a French tokamak set a record when plasma in a coiling loop remained at a similar temperature for 390 seconds, but the Chinese reactor has just beat that record.

Then in May 2021, EAST set another record by running for 101 seconds at an unprecedented 216 million Fahreinheit (120 million Celcius). This record garnered the highest temperature but fell short in time, compared to the new record.

For reference, the actual core of the sun, by contrast, is about 27 million Fahrenheit (15 million Celsius).

"The recent operation lays a solid scientific and experimental foundation towards the running of a fusion reactor," experiment leader and plasma physics researcher Gong Xianzu said to Xinhua Net.

Also Read: China Planning To Launch 'Artificial Moon' Predicted To Be 8 Times Brighter Than The Real One

China's EAST experiment will not be the last and only artificial sun out there.

After its completion, EAST will be used to test out technologies for an even bigger fusion project under construction in Marseille, France, called International Thermonuclear Experimental Reactor (ITER).

As the largest nuclear reactor in the world, ITER is a collaborative effort among 35 countries, including every country in the European Union, the United Kingdom, China, India, and the United States.

In a report by Live Science, ITER contains the most powerful magnet ever developed. Because of this, it can produce a magnetic field that is 280,000 times as powerful as that generated by the Earth's sun.

Future fusion reactors will "hopefully" provide scientists with deeper insight into how star's power can be harnessed on Earth when ITER comes online in 2025, according to the report.

However, China won't stop at EAST as Chinese nuclear fusion research is on the rise. Currently, the Asian nation is experimenting on inertial confinement fusion and plans to have a new tokamak up and running by the early 2030s.

Meanwhile, a US company may be able to finish its first viable fusion reactor as early as 2025 and a British company hopes to generate electricity from fusion by 2030.

Nuclear fusion is the process by which stars burn and it has taken scientists more than 70 years to figure out how to harness its energy.

All these experiments would not just help scientists. It would also generate enormous amounts of energy without releasing greenhouse gases or generating long-term radioactive waste.