The selfie NFT collection of Ghozali Ghozalo is now selling for about a hefty $1 million in sales. On top of that, the floor price for a single photo of the Indonesian college student is now selling to the tune of $1,500 each.

(Photo : screenshot from Ghozali Everyday Open Sea )
Selfie NFT collection now sells for about a whopping $1 million. Photos of the Indonesian student, known as Ghozali Everyday, skyrocketed to $1,000 per piece.

As per the news story by Crypto Briefing, the Indonesia-based student, Gozalo, went on to sell his selfie collection through the year as an NFT. It instantaneously became viral online, allowing it to amass a whopping trading volume of nearly $1 million.

The OpenSea account of Ghozalo that goes by the name Ghozali every day said that the NFT collection is composed of photos that he took himself from 2017 up until 2021.

It further stated that these photos of Ghozalo document his profile shots beginning when he was still 18 years until he reached 22.

The Indonesian further explained that "it's really a picture of me standing in front of the computer day by day."

However, Crypto Briefing noted in the same news story, that the whole NFT collection on Open Sea only includes 933 selfies. As such, it clearly shows that it was not a "day by day" snapshot from the past four years.

It is worth noting that the selfie collection of the Indonesia-based student was initially meant for a video in his school.

But instead of putting hundreds of self-portraits that he has taken through the years into a mere waste, he turned them into an NFT or non-fungible token collection.

He started selling these images of himself on OpenSea last Jan. 9 for $3 per piece. But now, it is nowhere near that price. 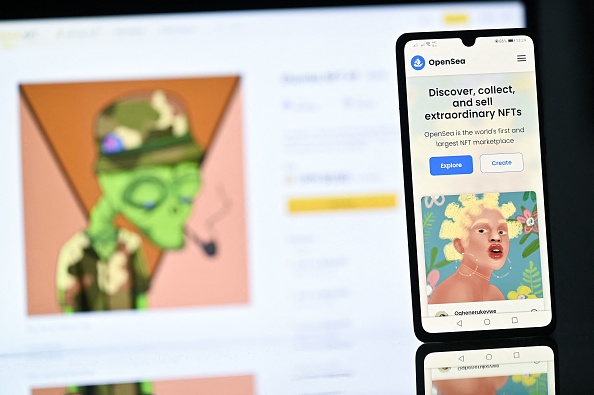 (Photo : by JUSTIN TALLIS/AFP via Getty Images)
An illustration picture taken in London on December 30, 2021, shows a NFT (Non-Fungible Token) created by Nigerian digital artist FreddieJacobArt named "Oghenerukevwe" on Opensea NFT marketplace, displayed on a phone and Binance NFT marketplace displayed on a computer screen. - Non-fungible tokens or NFTs are cryptographic assets stored on a blockchain with unique identification metadata that distinguish them from each other.

The title of the collection, "Ghozali Everyday," appears to be inspired by another massive NFT collection, Everydays: The First 5000 Days, that sold for more than a whopping $69 million way back in March 2021, CryptoBriefing said in the same report.

Meanwhile, as per the news story by The Block Crypto, the cheapest selfie from the massive Ghozali Everyday collection on OpenSea now starts from $1,500 or 0.475 ETH.

The NFT collection has also become a viral meme online, wherein it has positively skyrocketed the sales figures of its OpenSea listing.

In turn, the Ghozali Everyday NFT collection even made it to the top 40 listing of OpenSea, at least in terms of the 24 hours trading volume rankings, wherein it booked an impressive 72,000% increase.

Related Article: Best NFT Marketplaces That Could Fare Better Than OpenSea in 2022 | Coinbase, Rarible, and More