Scientists are baffled and amazed at one of the universe's rarest finds: a cosmic anomaly that is the first of its kind, with not one but three supermassive black holes in the center of a single galaxy.

Black Holes in the Center

Almost every observable galaxy in our universe has a supermassive black hole in the center, and it often has thousands to millions times more mass than our sun, as well as a tremendous and terrifying gravitational pull that sucks in dust, gas, and even light, leaving an empty space in between every galaxy.

Although not as common, scientists have found galaxies that share two black holes, mostly when they are merger galaxies or galaxies that used to be separate entities but have collided and merged into each other.

However, this discovery is the rarest, the first-ever known galaxy to have three supermassive black holes in its very center.

The galaxy, known as NGC 6240, is relatively close to our own at about 300 million light-years away, helping scientists investigate and study it further. 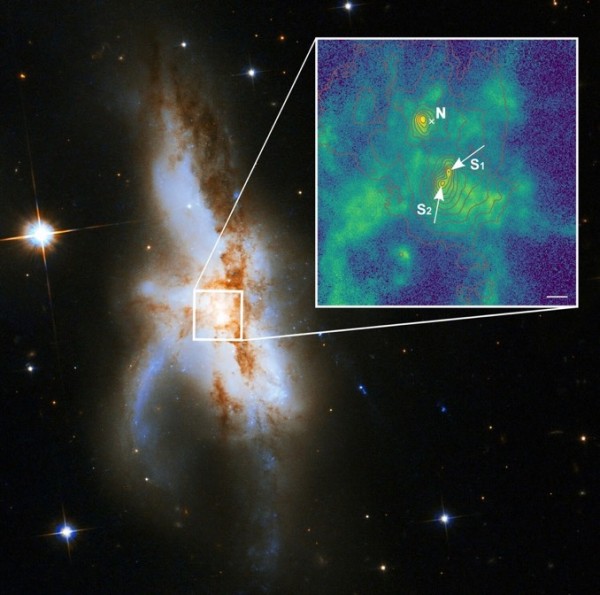 In 1983, scientists discovered it has two supermassive black holes.

Most galaxies—such as our own—have a circular or spiral shape, but the NGC 6240 has an odd shape, so it led astronomers to believe that it was a merger galaxy and was initially separate galaxies that are merging together.

As usual, the scientists thought that the galaxy would have two black holes at its heart—but they were somewhat shocked to discover a third, and each is weighing around 90 million Suns.

More than the third black hole, the scientists were astonished to discover that they were relatively close to each other, in the same region around 3,000 light-years across, as noted by Astronomy.com.

To put it into perspective, that is just one percent of the galaxy's overall size.

The First of its Kind

According to Dr. Peter Weilbacher of Leibniz Institute for Astrophysics Potsdam, finding three supermassive black holes in a cramped region has never been discovered before.

However, it is essential to note that scientists were able to discover before three separate galaxies with their respective black holes heading colliding, but this was the first single entity that had three supermassive black holes—and all in a really small space, close to each other.

Weilbacher continued and said that the discovery indicated that if there had been simultaneous galaxy merging processes happened, then the biggest galaxies with their central supermassive black holes had evolved much faster.

In fact, scientists still believe that NGC 6240 is still in the process of melding together, as with a number of other merging galaxies that were discovered previously.

Scientists also believed that after a few million years, the supermassive black holes would merge together and form a strong gravitational wave or maybe even cause ripples in time, according to CNN.

The exciting but rather strange discovery had been done via the Multi-Unit Spectroscopic Explorer (MUSE) on the European Southern's Very Large Telescope (VLT), located in Chile, and has been published in the journal Astronomy and Astrophysics.