In a surprising turn of events, a certain popular Call of Duty Streamer who goes by the name SoaRCarl has just recently been banned after firing a handgun live during his Twitch broadcast! This shocking move has obviously called for his account to be taken down as a result of violating the strict Twitch guidelines which is firm about these sort of things. This was certainly a fair decision by Twitch as the sight of the whole broadcast was quite alarming and also because this was a definite breach of Twitch guidelines. 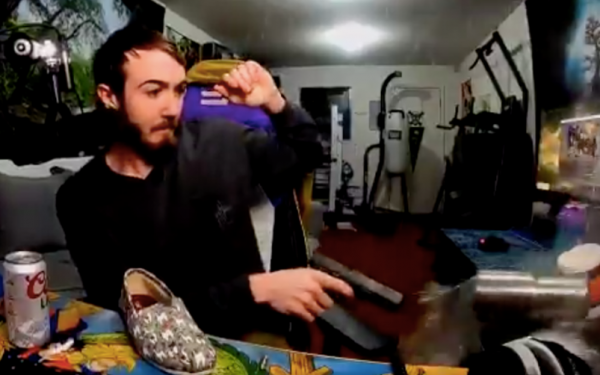 Twitch has rules about these sort of happenings

According to Twitch's guidelines, there should be no brandishing of any firearm of any sort which is an obvious violation for SoaRCarl as he not only showcased this firearm but even fired it live during his broadcast! Twitch does not take lightly these kinds of offenses and remains a gamer-friendly platform that does not promote violence, obscurity, and certainly dangerous acts like firing a handgun during a live stream.

Read Also: BANNED FOR NUDITY ON STREAM: Why is xQc Banned from Twitch While Others Are Not?

SoaRCarl, whose real name is Carl Riemer, suffers from not just the removal of his Twitch account but also his removal from the SoaR Gaming roster as this was one of the reasons why he was able to become a successful Call of Duty streamer. It would be quite hard for Carl to regain his fan base and status as a popular game streamer during broadcasting now that the damage has been done and was probably much more than what Carl expected. Carl has over a million viewers on YouTube so if he wishes to continue releasing content, he might have to go back to YouTube for a while.

The contents of the video

For those who were able to catch the video, there is a glimpse of Carl pulling up a gun right before accidentally shooting something off-screen which then caused a cup to fall to the ground and debris to splatter all right in front of Carl's camera. This was quite a shocking sight to see especially for the fans of Carl as he was known to not have those violent tendencies but the main fact that he was in possession of a gun says something about him.

The aftermath of this incident

Right after this incident happened, Carl realized the consequences of his actions and immediately took it to Twitter to post an apology as well as confirming that him and his partner Aliciya were okay and still together. The apology was sincere but it was not enough to get back SoaRCarl to Twitch because of the clear violations that he made and even the carelessness of letting his viewers see exactly what happened.

Don't do what I did. Ever. Literally everything was going perfectly in life and one mistake ruined everything I've been doing for year. I cannot put into words how sorry I am and how dangerous what I did last night was. pic.twitter.com/O781ecXxJN — Carl Riemer (@SoaRCarl_) March 5, 2020

With lots of regrets, Carl advised his followers in an apology video not to do what he did (firing a handgun live on Twitch) and how he feels about throwing away everything that he has been working for. He even thanked the SoaR team for doing what they needed to do.

ⓒ 2021 TECHTIMES.com All rights reserved. Do not reproduce without permission.
Tags: Call of Duty Twitch Streaming Youtube Twitter
Most Popular