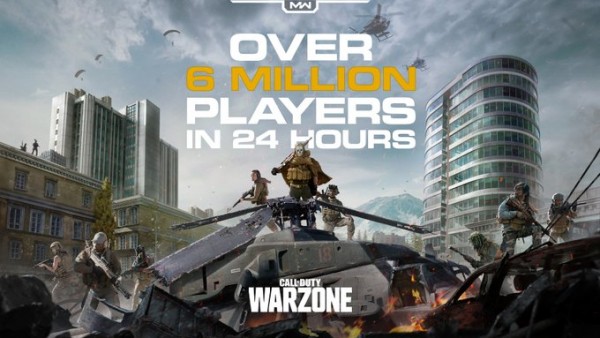 What a day! 24 hours in and over 6 million of you have dropped into #Warzone.

Call of Duty took its big news to Twitter that they have racked up 6 million players in just 24 hours, which beats Apex Legends with only 2.5 million in 24 hours and 10 million in its first 3 days.

Unlike Fortnite and Apex Legends, Warzone has a game mechanic wherein if a player gets eliminated, they can have a chance at a second life by battling other eliminated players in a 1v1.

What new players could expect

Players group up in trios and fight to be the last squad alive while trying to avoid a deadly gas with up to 150 players.

There are vehicles that can be used for all players to choose from, namely, ATVs, SUVs, Tactical Rovers, Helicopters, and Cargo Trucks.

What sets Warzone apart is The Gulag feature wherein when a player gets eliminated, they will be prisoners of Warzone and will be taken into the Gulag to fight to the death on a 1v1 to earn the reward of having second chance to go back to the game. Your teammates can always bring you back in exchange for in-game currency when you fail.

Contracts can be used in-game and you and your teammate will earn cash, loot, and special rewards like the ability to see where the next circle.

For players that already have the game, the download size will be between 18GB - 22GB of additional data. And it will be accessible on the "Classified" panel on the in-game. if you don't have Modern Warfare, you'll need at least 83-101 GB of free space for Warzone, and you need to go to your desired platform stores and search Call of Duty: Warzone, download and play.

While players wait for their download to finish, Modern Warfare's Gunfight Mode can be played offline after the first 20GB, which will let them face against offline bots.

Though Call of Duty: Warzone is the worst kept secret game ever, it's still pretty much ane exciting game and they have numbers to prove it.

If you are new to Battle Royale or just Warzone, check out these tips and tricks on how to find locked bunkers and debunk warzone mysteries.

Call of Duty: Warzone launched in two different times. Owners of Call of Duty: Modern Warfare had their release time be 11 a.m. EDT on Tuesday, Mar. 10, and non-owners got their downloads at 3 p.m. on the same day.

So far, Call of Duty: Warzone has been getting a lot of praises and hopefully, it stays that way as they work themselves up to the top.

Read Also: The Long Wait is Over! Call of Duty: Warzone is Launching Soon and This is All You Need to Know!