As countries worldwide scramble to control the unexpectedly spreading coronavirus, authorities are installing location or considering a number tracking and surveillance technologies that test the limits of personal privacy.

The technologies include the whole thing from revealing the places of people through their phones to facial-recognition that can recognize who may have contracted with people who tested positive for the virus. 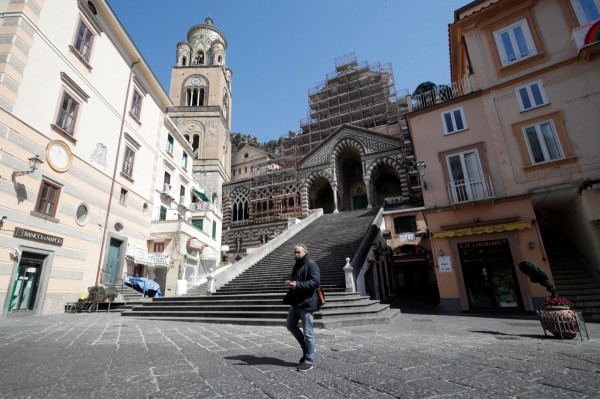 (Photo : REUTERS/Ciro De Luca)
A man walks in the deserted town centre of Amalfi as Italy remains under a nationwide lockdown in a government decree that orders Italians to stay at home, Italy, March 19, 2020.

The push is in a component being coordinated by a task force running at the side of the White House and tech giants --- including Google, Facebook, and Amazon.Com Inc. The task-force discussions related to the White House and tech businesses were reported earlier this week. Other efforts are focused on grass-roots, with tech agencies pitching state groups and governments.

Tech and authorities officers are struggling to find a balance between deploying generation and preserving patients' facts-especially medical data-safe. Some privacy advocates fear that little has been disclosed on what is being deliberate or implemented.

Technology executives spent tons of an hour-long meeting Sunday, according to the Wall Street Journal. Both parties discussed ways to tune hospital-bed availability throughout the united states the usage of geolocation data. The Wall Steet report also tackled how the records can be aggregated so that personal statistics of cellphone users wouldn't be shared. It isn't clear which companies could deal with that form of tracking.

Other nations have already deployed location-tracking systems and different tech answers to fighting the pandemic. However, many such efforts should run afoul of U.S. privateness laws.

In China, telecommunications businesses helped the government track and touch folks that had traveled through Hubei province during the early days of the virus. Location data was funneled to China's National Health Commission, allowing them to re-create its approaches to know virus carriers and avoid misinformation in social media.

Crowcroft told Wired that official health agencies could use the app to populate anonymized map data, which might help reduce transmission.

The application, according to Crowcroft, would allow researchers to find out how long the virus survives on a surface, what fraction of the population are asymptomatic carriers, and where to target critical medical resources.

ALSO READ: Is Coronavirus Airborne? Not Quite As Scientist Claims Prevailing Winds From Outer Space Are Spreading the Disease

A report from DailyMail said Facebook and Google are exploring ways to use the data in tracking and slowing the spread of coronavirus as part of the venture-force discussions.

The government should legally request location data from telecom companies or Google, which has access to more-precise data, said Al Gidari, data privacy director at Stanford Law School. These records can't typically be launched without user consent or a court docket order. However, the government has broader authority to request such facts within the event of an emergency. He told DailyMail. "I don't think anybody would dispute that that is an emergency," he said.

Camber Systems, a location-monitoring startup founded by former U.S. officials, said it leverages "records, gadget mastering and artificial intelligence" in manipulating transportation and infrastructure. The company hopes to work with the nation and local organizations to apply their records.

Ian Allen, Camber's chief executive, told WSJ in an interview: "How do we put in the policy framework, so we're not South Korea or China or Israel if we're to leverage commercial technology to save lives?"

Some privacy advocates fear that the disaster of the moment should create a brand-new paradigm.

Adam Schwartz, a senior attorney at the Electronic Frontier Foundation, an advocacy employer for civil liberties and technology, said governments must be transparent on the tools they're using.

The discussion yet to be adopted by any corporation. However, the tech companies hope the move would be useful in "contact tracing"-figuring out who else might have been with someone acknowledged to have the virus.

Palantir is working with the CDC on information series and facts integration associated with disease monitoring, according to a person familiar with the company,

During the cholera outbreak in Haiti in 2010, the CDC used Palantir to "display the scenario and inform their reaction efforts," according to a white paper later published with the aid of Palantir. The agency's era allowed government analysts to "explore text messages" among Haitians and a text platform built by using an outdoor technology employer.