Coronavirus Update: Teenager With Coronavirus Was Denied Treatment Because He Didn't Have Health Insurance

A 17-year-old boy in Los Angeles County died of coronavirus. The sad part of this story, he was denied treatment at a care health facility because he didn't have health insurance, officials claim.

"He didn't have insurance, so they [healthcare workers] did not treat him," Lancaster Mayor R. Rex Parris said in a video posted to YouTube.

Roughly 27.5 million Americans-8.5 percent of the population-don't have health insurance based on the latest government figures.

Mayor Parris narrated the body of workers at the pressing care facility advised the teen to try the emergency room at Antelope Valley (AV) Hospital, a public clinic in the area.

The teenager had a cardiac arrest en route to AV Hospital, the official said. "When he [arrived at the] AV clinic, they [healthcare workers] were able to revive him and keep him alive for about six hours," Parris continued. But by the time he arrived there, the official said it was too late. 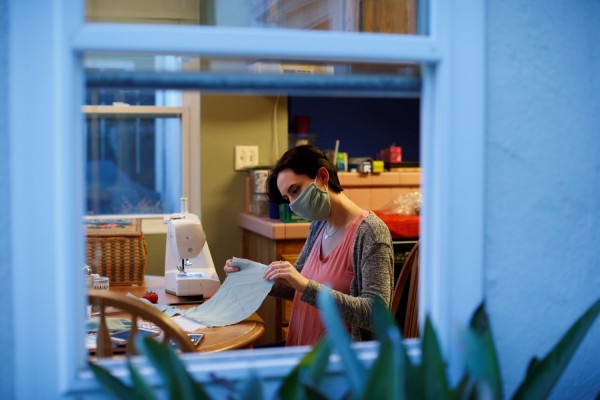 (Photo : REUTERS/Mario Anzuoni)
Resident Jillian Kislow makes face masks for her friends in her kitchen during the global outbreak of the coronavirus disease (COVID-19) in Pasadena, California, U.S., March 26, 2020.

ALSO READ: New Coronavirus Symptoms: Scientists Say People May Not Notice Signs of COVID-19 as Some of them Seem Normal

The name of the pressing care sanatorium that refused to treat the teen has not been released. Mayor Parris defined in his YouTube video that the 17-year-old is assumed to have had no underlying situations that can have contributed to his demise.

The Lancaster teenager tested positive for COVID-19. But the Centers For Disease Control and Prevention (CDC) is reportedly evaluating the case to look if there's another explanation for his loss of life.

The initial purpose of death turned into defined on Tuesday as a septic surprise from headaches with COVID-19. The youngster's father was tested advantageous for COVID-19 as well. Soon, the dying teen was removed from the professional U.S. demise toll, in step with Public Health Director Dr. Barbara Ferrer, who gave a press convention on Wednesday, Mar. 25.

ALSO READ: [BREAKING] Nurse With Coronavirus Kills Herself Over Fear of Infecting Others

More than a thousand cases in Los Angeles County

The Johns Hopkins online coronavirus tracker noted the whole country has identified at the least 85,991 COVID-19 cases and 1,296 deaths as of Friday morning. The United States has already surpassed Italy and Spain with the highest number of confirmed cases of the virus worldwide.

There have also been allegations from health care workers in the United States that a few COVID-19 deaths aren't properly counted. Hospitals, on the other hand, become crushed with patients, every now and then ready hour to get tested.

One nurse in California who refused to be identified told BuzzFeed News this week the numbers are "grossly underreported.

"I know for a fact that we've had three deaths in one county where only one is indexed at the website," the nurse added.

ALSO READ: U.S. Coronavirus Cases Could Shoot Up to 1 Million; Shortage of Ventilators Looms With Only About 100,000 on Hand

"I suppose that a lot of factors are being stated that are more [than needed]," Trump said of the medical device requested by the governors.

Meanwhile, Los Angeles County is making ready for an influx of patients like they see in different U.S. Hotspots like New York, Washington, and Louisiana. Local CBS TV affiliate KCAL-9 reported Los Angeles Convention Center is currently being transformed into a quarantine center.

And the metropolis of Lancaster is setting up makeshift triage centers, as evidenced by the range of cots in Mayor Parris's very own video on YouTube.