The deep-sea is filled with fascinating and weird creatures that we rarely see, much less capture in videos for the world to see. But, researchers were able to capture a bizarre and otherworldly creature from the deep sea: a 150-foot long siphonophore known as Apolemia. 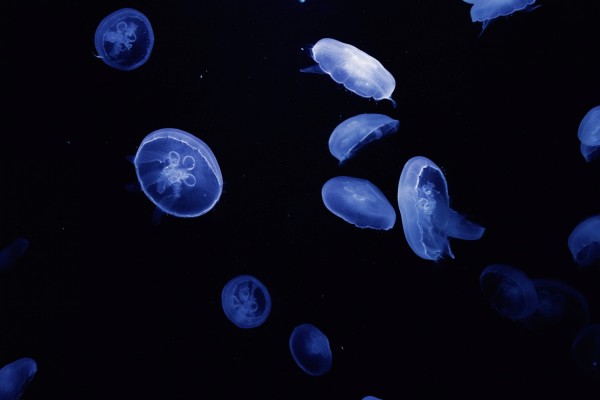 (Photo : Kon Karampelas from Pixabay)
The siphonophore is related to the jellyfish and corals.

According to Newsweek, the team aboard the RV Falkor, which is the flagship research vessel of the Schmidt Ocean Institute (SCI), was the one that spotted the creature.

The footage of the rope-like creature was captured through the use of a remotely operated vehicle (ROV) in a deep-sea environment around Ningaloo Canyons, which is located off the coast of Western Australia.

The SCI researchers then posted the short clip of the organism on Twitter, sharing a one-of-a-kind find.

"Check out this beautiful *giant* siphonophore Apolemia recorded on #NingalooCanyons expedition. It seems likely that this specimen is the largest ever recorded, and in strange UFO-like feeding posture," SCI wrote.

Siphonophores are related to the jellyfish and corals and may look like a single creature, but they are actually made up of thousands or millions of individual clones to create a single entity.

In the video, the siphonophore Apolemia resembled a long piece of thin string floating in the middle of the ocean, but the truth is it includes several thousands of clones.

They were able to roughly calculate the length of the siphonophore's outer ring using lasers that are mounted on the ROV, which are known as SuBastian. Based on the device, they believe the outer ring is around 49 feet in diameter, and the creature is estimated to be about 150 feet long.

How Does it Feed?

The floating colony of medusoids and polyps are deemed as a deep-sea predator, waiting for an unfortunate sea animal that will be caught by some of the specialized clones that have stinging cells.

Since the tweet garnered interest from nearly 2,000 people, many curious individuals asked questions about the otherworldly creature.

Among the people who saw the fantastic 30-second clip was an assistant professor from the University of North Carolina Asheville, Rebecca Helm, who said that the siphonophore clones have dozens of different jobs to do and each of the clones has a particular task.

"I've gone on numerous expeditions and have never, EVER, seen anything like this. Let me tell you what this is and why it is blowing my mind," Helm said.

According to the North Carolina professor, the most common siphonophore colonies were around 20 centimeters long to a meter, but the captured siphonophore colony was massive and to be caught while its hunting is extremely rare.

There might even be more of these massive siphonophore colonies out there.

The siphonophore colony does not have to move to feed, especially with its massive size and its hunting style of going around in a "galaxy-like spiral."

Nevertheless, it's hard to determine the age of the siphonophore colony, especially since everything in the deep sea grows slower than usual.

Helm has created a thread on the Twitter post for anyone curious about this amazing sea creature.