Rings of Uranus Are Like Nothing Else in The Solar System, Scientists Claim

For the first time, researchers had been able to determine the temperature of the Uranus' rings. They confirmed that the first ring - referred to as the epsilon ring - is like no other in the Solar System.

Usually, Saturn is the only pictured with a ring, because those circling Uranus, Jupiter, and Neptune can best be seen with single telescopes.

The research can be seen in The Astrophysical Journal. 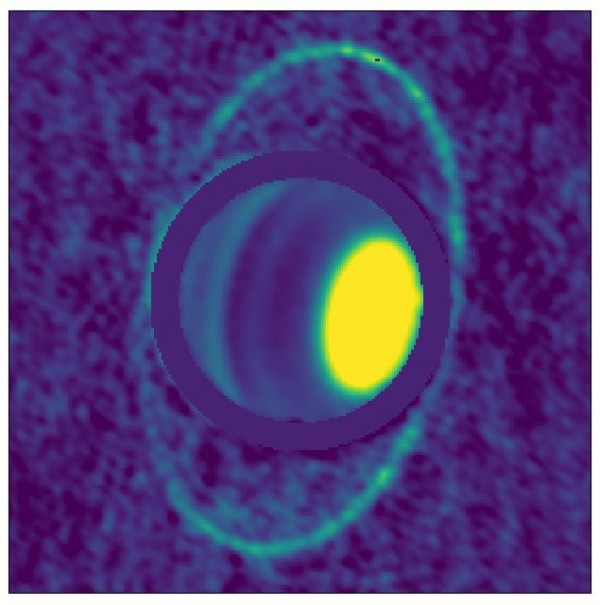 (Photo : © UC Berkeley image by Edward Molter and Imke de Pater)
A composite image of the atmosphere and rings of Uranus seen in thermal emission.

ALSO READ: How to Get to Uranus and Neptune? Scientists Will Use a HUGE Spacecraft Slingshot!

Nobody knows much about Uranus' rings until a 2016 study shows that the rings of Uranus might be the remnants of Pluto-like dwarf planets that strayed too close to the planet before. In fact, the rings are so dim and were not even found until 1977.

So it was somewhat unexpected while the rings showed up in thermal images astronomers took to discover the temperature structure of the planet's atmosphere, including the epsilon ring.

"We were astonished to see the rings jump out clearly when we reduced the data for the first time," said astronomer Leigh Fletcher from the University of Leicester.

Because it was a thermal image, the crew was able to measure the heat of the ring. They noted a temperature of 77 Kelvin, the boiling point of liquid nitrogen at standard atmospheric pressure. The floor temperature of Uranus gets as low as 47 Kelvin, so it's even cooler.

Researchers also confirmed that the rings are indeed weird compared to other planets. While Voyager 2 flew past Uranus in 1986 and took photos, scientists returned home noticed that the rings seemed to be lacking something.

ALSO READ: Mysteries of Uranus Property Has Something to Do With Icy Impact, Scientists Claim

Meanwhile, Uranus has sheets of dust between its rings. Still, the rings themselves only have chunks bigger the size of a golf ball.

Astronomer Edward Molter of UC Berkeley said something has been sweeping the smaller stuff out, or it's all glomming together.

This is a step toward understanding their composition and whether all of the rings came from the same source material, or are different for each ring," Molter said.

Possible sources of dust include sediments comprising a material that is thrown out from moons; pulverized asteroids; or particles from the theorized effect that knocked the planet sideways. The most probable explanation is stable orbiting objects, destroyed either by effects or tidal forces.

"The albedo is much lower: the [particles are] simply dark, like charcoal," Molter said. He added the gap between the epsilon ring varies from 20 to 100 kilometers wide. At the same time, Saturn's are hundreds or tens of thousands of kilometers wide.

So, even with the stunning new pics, the rings are nonetheless a big mystery. But a thriller that can have more clues soon, while the James Webb Space Telescope, with its modern technology, hits the sky in 2021. Hopefully, the scientists would search at Uranus as it warrants some of its treasured time.

ⓒ 2021 TECHTIMES.com All rights reserved. Do not reproduce without permission.
Tags: Uranus
Most Popular