Governments can't urge their citizens to use technology constructed by Apple and Google for tracking and mitigating the spread of the COVID-19 coronavirus, tech giants said on Monday, Apr. 13. 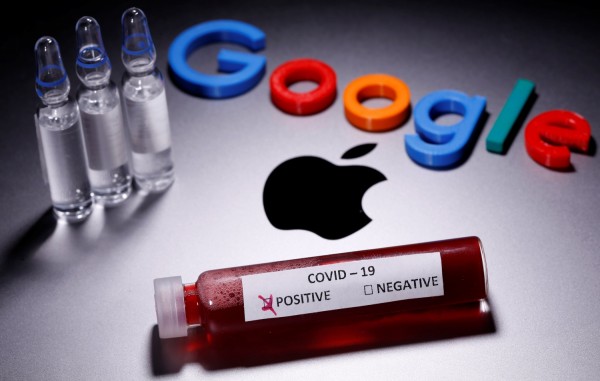 (Photo : REUTERS/Dado Ruvic/Illustration)
A test tube with fake blood and COVID-19 label and a 3D printed Google logo are placed near an Apple Macbook Pro in this illustration taken April 12, 2020.

Apple and Google, commonly arch-rivals, said on Friday, Apr. 10, that they teamed up to build technology that enables public health organizations to trace down touch-tracing apps. The Silicon Valley giants are responsible for the two dominant mobile running structures globally, iOS and Android, which together run nearly 100% of smartphones sold, Statcounter said.

Contact tracing helps health agencies locate people who have been infected with a pathogen. Contacting individuals who may also be in close contact with the patient would be informed to self-isolate or take other measures. Contract tracing apps have been endorsed by experts who've seen the effectiveness of "syndromic surveillance" in tracking and slowing ailment outbreaks.

Around the world, governments are turning to touch-tracing apps as a tool to help organizations and businesses re-open after coronavirus lockdowns. Singapore launched a contact-tracing app called as TraceTogether in March. England's National Health Service and numerous French ministries are operating on their own apps.

The reality that the apps work best when many people use them has raised fears that governments could force residents to use them. But representatives from each company insist they won't allow the technology to come up as mandatory.

Starting in May, CNBC reported Google and Apple are planning to update their phone operating systems with new application programming interfaces (APIs). With the latest update, mobile apps can track other phones nearby through Bluetooth signals. Recognized public health groups might then use those APIs to build virtual touch tracing apps, with some improvement help from Google and Apple.

When someone tests positive for COVID-19, local public health agencies will confirm the test. Officials will then use the apps to notify each person who may have been in the 10 or 15 feet range in the past few weeks.

The identity of the individual that tested positive would never be disclosed to the groups or to other users. Their information would be tracked by the use of scrambled codes on phones that are unlocked most effectively while they test positive. Only public health authorities can be allowed to access those APIs, the agencies said.

The agencies have drawn a line in the sand in one area. Governments will not be able to require their citizens to install a touch-tracing software program constructed with these APIs. In essence, customers will opt-in to the gadget, senior representatives stated on Monday, Apr.14.

The more people in a location who downloaded the area's track tracing app, the more effective it's going to be at identifying folks who may also be infected. To succeed, then, the organizations and public health officers will want to persuade people to trust them with their information. Users who don't want to take part can stop, delete the apps and inform the software to forestall tracing them, an Apple representative said.

Apple and Google said that they may close down the system per region when the pandemic slows down. The corporations stated they'll offer sample apps that as a starting point for public health companies rolling out those apps.

Then, later, the companies plan to build the software to each Android and iOS so that downloading an app won't be necessary when contract tracing begins.