Viral footage of a chimpanzee in human clothing while riding a bicycle received backlash from the animal rights group. As explained, the monkey was forced to ride a bike, wear human clothes and a face mask, and sanitize the whole zoo amid coronavirus. Apparently, the Thailand-based zoo was already under a lot of complaints of animal cruelty from the past.

After zoo dresses up a chimpanzee with a mask, animal rights now demand an investigation 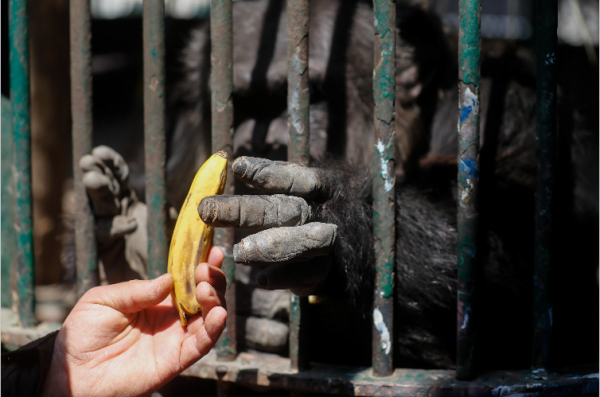 As first reported via Daily Mail UK, one of Thailand's zoos called Samutprakarn Crocodile Farm and Zoo may soon be faced with an investigation of animal cruelty. This was after animal rights groups seen a video of a chimpanzee forced to wear human clothes, ride a bicycle and sanitize the entire place amid Coronavirus issue.

In the first part of the video, the chimpanzee was seen chained in a wooden block trying to wear denim shorts, an orange Hawaiian shirt, and a surgical face mask. He was seen with his zookeeper that keeps the human clothes.

After a while, the monkey rode the bicycle with an attached disinfectant spray on its back. The video shows the chimp having a hard time riding the bike. His zookeeper was also seen beside him that holds the chain from the kiddie bike.

PETA describes the act as 'heartbreaking'

The People for the Ethical Treatment of Animals (PETA), expressed their dismay with the viral video. The agency describes the act as 'heartbreaking' and said that the zoo was a 'hell hole' for animals forcing them to do tricks.

"Places like Samutprakarn Crocodile Farm and Zoo are hellholes where animals like this chimpanzee endure miserable lives in captivity every single day," said PETA Spokesman Nirali Shah. "They're routinely mistreated and know little more than chains. When they're not used for human 'entertainment,' they're held in cramped cages."

Zoo director Uthen Yangpraphakorn defended the video by saying that the zoo was closed due to the virus, and the chimp was only allowed to ride the bike to "let him stretch his limbs during this inactive period."

'We have been closed since the government orders about the virus, so in the meantime, we do not have much to do. We clean the place two or three times a week in case the government will allow us to re-open, so we are ready to start accepting visitors again," explains him. "The chimp was also trained in the farm, so we just brought him out to let him stretch his limbs during this inactive period."

Unfortunately, this was not the first time that alleged animal cruelty was reported in the same zoo. Last December 2019, a thin elephant was seen being forced to perform tricks for the crowd.

PETA already contacted the zoo and said that these cases would be investigated soon.

"PETA submitted the investigative findings to the Thai police and lodged an official complaint with authorities, urging them to inspect the zoo," said the spokesman.

ALSO READ: COVID-19 vs. Antibodies: Antibody Points Can Be Used To Create The Vaccine, Experts Say