Facebook has started banning some pages that promote protests against the government's advice about social distancing amid the coronavirus pandemic.

Numerous residents have protested in various states against some stay-at-home rules. Many of these involve large groups that gather closely despite the government's instruction to observe social distancing to combat the spread of the coronavirus.

Sources from Facebook said the company recognizes that some people may promote such protests, but the company will only allow the protests to be promoted on the social media network if social distancing is followed.

The company is then keen on "removing content that advocates for in-person gatherings defying government health guidance," the sources said. Contents and claims intended to "discourage treatment" or take "appropriate precautions" to tackle the coronavirus pandemic will be removed as well.

However, not everyone agrees on this new policy. Cornell Law School professor William A. Jacobson said in an interview with Fox News that Facebook seems to follow instructions from state governments to suppress freedom of speech.

"Facebook may have crossed the line from platform 'misinformation' control, which arguably is lawful as a private entity, to acting as an extension of government," said Jacobson.

The United States has now reported a total of 759,786 COVID-19 cases with 40,683 deaths, two months after the first confirmed case of coronavirus was recorded on Jan. 20. 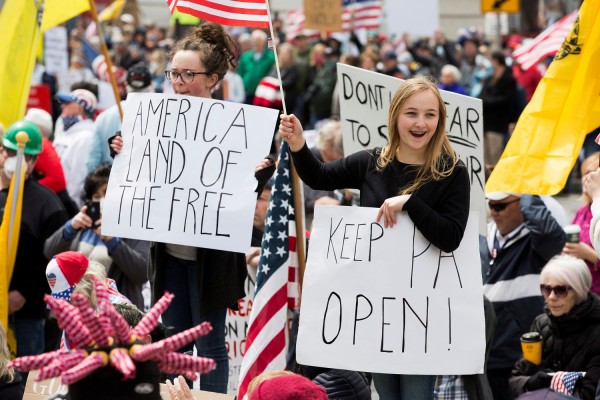 Removed due to error

On Apr. 15, a fitness instructor was shocked that Facebook wrongly removed a fitness video for allegedly showing "explicit content." The video is a tutorial on how to massage leg muscles after doing a workout.

Since the lockdown, John Molyneux, 41, creates daily workout training programs for senior people and uploads them to his Facebook page, MolyFit.

On the 11-minute long video, Molyneux was sitting on a stool and teaching people how to properly massage their leg muscles using massage oil after a workout.

However, the video, which mainly showed John massaging his thigh muscles with his thumbs and elbows, was deemed to "go against community standard of Facebook."

A resident of St Albans, Hertfordshire, Molyneux said he was shocked when he got this notification that said the video "goes against Facebook's community standards" and that nobody could see it.

'It was a bit troubling, because you don't want to get in trouble with the Facebook police, but also because there are a fair few people who watch my videos," said Molyneux.

He is essentially building a career reputation since each of his videos gets around 500 to 1,000 views. This is why he would not want to be involved in some Facebook scandal about sexual content as he deals with the elderly.

After reporting the mistake, Facebook acknowledged its error and reinstated the video after about three or four hours.

"I'm a sports therapist, so my career and all my videos are about muscles and how to deal with muscles," exclaimed Molyneux adding it was not the first massage video he did and posted on Facebook. In his previous videos, he also showed people how to massage their neck and chests, so it came as a surprise that "this one got picked out."

Read also: How Can You Cope With The Pandemic? Here Are The 5 Things Mentally Strong People Do