France has asked Apple to remove its Bluetooth restrictions, which blocks a contact-tracing app that would monitor the spread of COVID-19.

The app, which has already become a part of daily life for people in China, would help health services track the people who were in contact with those infected with the coronavirus. This will also assist governments in deciding on easing movement restrictions, which started in March.

Scheduled for launch in France on May 11, the app relies on Bluetooth technology, but Apple's operating system blocks it off. Due to the device's privacy protection, it does not allow Bluetooth to run in the background if the data it obtains is going to be removed from the device.

However, France and the European Union want to store the data to a central server, which is managed by state health services, which would alert users whenever they have contracted with a person infected by COVID-19.

France's digital minister Cedric O told Bloomberg that Apple seems to be reluctant about their request. "We're asking Apple to lift the technical hurdle to allow us to develop a sovereign European health solution that will be tied our health system," said O adding that the company refers them "to its plans for a similar app in partnership with Google" instead. 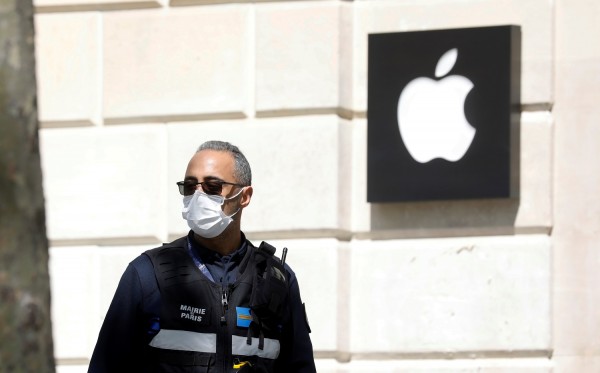 (Photo : REUTERS/Charles Platiau)
A municipal policeman wearing a protective face mask walks past the closed Apple store on the Champs-Elysees avenue in Paris as a lockdown is imposed to slow the rate of the coronavirus disease (COVID-19) in France, April 16, 2020.

Meanwhile, this issue triggers a wider concern about the privacy measures associated with these apps. Recently, the American Civil Liberties Union (ACLU) published a study discussing the concerns that need to be considered to make contact tracing technology effective.

"While some of these systems could offer public health benefits, they may also cause significant risks to privacy, civil rights, and civil liberties," wrote Jennifer Stisa Granick, ACLU's surveillance and cybersecurity counsel, in a blog post

The Human Rights League in France has said that any system put in place should be based on "information that is easy to read and understand" to allow citizens to provide "specific, free, and informed consent," which is not the case since various technologies are currently on the table.

Any system that sends data to a centralized location is inherently less secure and would permit surveillance on users.

Such a program would "catastrophically hamper trust in and acceptance of such an application by society at large," the letter said. "It is vital that, in coming out of the current crisis, we do not create a tool that enables large scale data collection on the population, either now or at a later time."

Meanwhile, the Apple spokesman mentioned its partnership with Google, which would enable Bluetooth-based contact-tracing apps and declined to comment further. Apple and Google's contact-tracing apps should become available to governments and public health authorities next month. However, the French are still banking on a home-grown solution.

The European Union said last week it would scrutinize the technology being developed by the two tech giants to ensure it meets the bloc's new standards governing the deployment of COVID-19 apps. Meanwhile, Apple and Google have defended their system's privacy, saying users' names and locations will not be shared or stored.

Read also:600 Iranians Have Died And Thousands More In Hospitals After DrInking Highly-Concentrated Alcohol In Believing It Would Cure COVID-19