On Tuesday, May 5, China reportedly launches its largest carrier rocket that has a size of more than an Olympic swimming pool. The rocket named Long March-5B carries a new-generation spacecraft. Impressively, the rocket completed its launch without a single hitch on the system. What is it for?

China flies the biggest carrier rocket in space-- Is it trying to beat the U.S.? 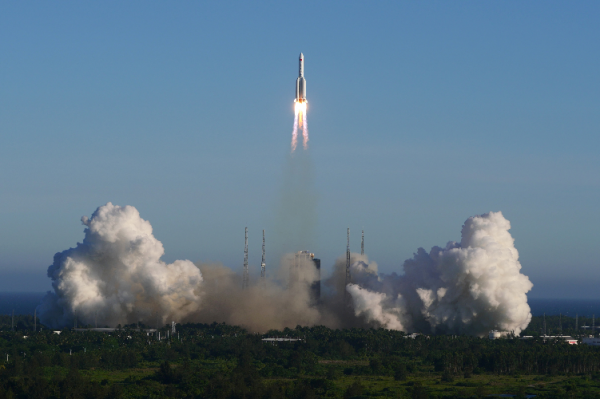 The Long March 5-B carrier rocket took off at 1800 local time (1000 GMT) at the Wenchang Space Launch Center in the southern island province of Hainan.

This heavy-lift rocket is one of the most prestigious projects of China in accordance with their plan to explore deep space. It has a length of about 53.7 meters and a takeoff mass of about 849 tonnes. This means that the rocket is supposedly bigger than the normal 50 meter-size huge Olympic swimming pool.

According to space, the Tuesday flight still has no crew inside it since its only a test launch. But, since the performance of the Long March 5-B is impressive on its first try, it is expected for China to continue the country's scheduled Mars Mission called Tianwen in the upcoming summer season.

As also reported via space, aside from the mission of China to travel to space, another purpose of the test launch was to test its other features such as heat shield, parachutes, and its unnamed human capsule.

This capsule is said to carry six to seven astronauts at a time and travel to space to fully complete the mission of the government to create a new space station designed for the country.

Not only that, but the said rocket can also lift almost 25 tons of payload to low Earth orbit, which was one of the requirements to create the said space station.

"Compared to the two-stage half-configuration of Changzheng-5, Changzheng-5 B is a first-order half-configuration. Its future mission is to integrate the three modules of our space station, including the core module, experimental module I, and experimental module II. Sent into orbit to complete the construction of the space station cabin," explains Zhou Jianping, Chief Designer of China's Manned Aerospace Engineering.

This is just the beginning

China seemed too aggressive into getting their rockets to space and said that this will not be the last one that the government will launch a spacecraft to space.