The National Health Service (NHS) in the United Kingdom will be giving its frontline health workers hydroxychloroquine, a malaria drug, to assess whether it can prevent COVID-19, according to a Newsweek report.

The announcement comes after health experts criticized President Donald Trump for announcing that he had been taking the drug for nearly two weeks.

Food and Drug Administration has previously warned hydroxychloroquine could cause serious heart problems while the World Health Organization (WHO) alerted against self-medicating as the study in the U.K. involving front line health workers was carried out in a controlled environment. 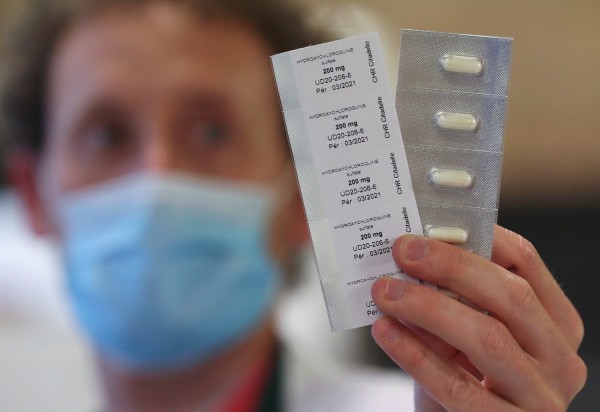 The study for hydroxychloroquine is open to staff in Brighton and Sussex University Hospitals as well as the John Radcliffe Hospital in Oxford.

About 40,000 people who work with confirmed or suspected coronavirus patients from Europe, Africa, Asia, and South America will be subjected to a randomized, placebo-controlled trial.

According to Co-Principal Investigator Professor Sir Nicholas White from the Bangkok-based Mahidol Oxford Tropical Medicine Research Unit (MORU), which is running the trial, neither the patients nor the researchers know who is getting a placebo and who is getting the treatment to prevent the results from being biased in any way.

"The best way to find out if they are effective in preventing COVID-19 is in a randomized clinical trial," White said.

However, some concerns arise in increasing the demand for hydroxychloroquine could diminish the supplies of the drug for patients of malaria and arthritis.

Wisconsin woman was shocked to learn that she turned positive for COVID-19 although she has been taking the drug for nearly two decades.

A patient named Kim has been taking the drug for 19 years to treat her lupus. "When they gave the diagnosis, I felt like it was a death sentence," Kim told ABC affiliate WISN.

"How can I be sick? How? I'm on the hydroxychloroquine," said the shocked patient said although she admitted that nobody said that it was indeed the cure or whether it makes people safe.

Kim believed she would no longer contract the virus because Trump has been promoting it touted the drug as effective. She started to experience troubling symptoms last month, although she just went out for groceries.

Kim took antibiotics prescribed by her primary care doctor, but Kim remained weak. She then went to an urgent care clinic, then Kim later tested positive for the virus at a hospital where she was admitted and given plasma.

After this experience, Kim was angry with those who promote Hydroxychloroquine as the cure for coronavirus.

"You're not safe taking that medication at all," said Kim adding that it is not going to prevent a person from contracting the virus.

Newsweek reached out to the FDA for comment. This article will be updated with any response.

Read also: COVID-19 Patients with Type 1 Diabetes Have Higher Risk of Death; Coronavirus In Saliva Can Travel More Than 5 Meters

ⓒ 2021 TECHTIMES.com All rights reserved. Do not reproduce without permission.
Tags: Coronavirus Search for COVID-19 Cure Hydroxychloroquine COVID-19
Most Popular