Single-use face masks and gloves are washing up on shorelines and on the ocean floor. Ocean conservationists have warned that the coronavirus pandemic has polluted the ocean as these small personal protective equipment (PPE) are adding to the piles of plastic waste that have long been threatening the world's marine life.

In a video by Laurent Lombard for Opération Mer Propre, disposable masks can be seen floating like jellyfish, and latex gloves are scattered on the seabed near Antibes.

The French non-profit's activities include regularly picking up litter along the Côte d'Azur. They began warning people about the status of the seabed after publishing the video late last month.

One of the members, Joffrey Peltier, described the pile of junk as "COVID waste," which includes gloves, masks, and bottles of hand sanitizer beneath the waves of the Mediterranean, joining the usual disposable cups and aluminum cans scattered on the seabed.

While the quantities of masks and gloves were still relatively small, Peltier is concerned that this is the start of a new kind of pollution. "Pollution promises to come if nothing is done," said Peltier as millions worldwide switched to single-use plastics to combat the coronavirus.

Lombard of Opération Mer Propre wrote on Facebook that French authorities have ordered two billion disposable masks and "soon we'll run the risk of having more masks than jellyfish in the Mediterranean."

The group hopes the video will urge people to switch to reusable masks and frequent handwashing and other alternatives that offer protection against the virus. "With all the alternatives, plastic isn't the solution to protect us from COVID," said Peltier.

For years, environmentalists had warned of the threat posed to oceans and marine life as about 13 million tonnes of plastic goes into the ocean every year as estimated by the UN Environment in 2018. The Mediterranean Sea receives about 570,000 tonnes of plastic a year, which is like dumping 33,800 plastic bottles per minute into the sea. 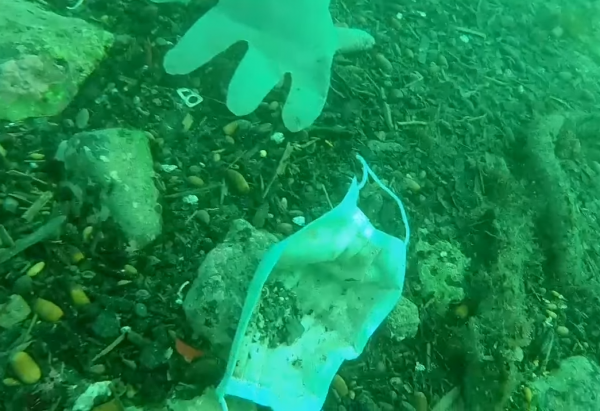 (Photo : Laurent Lombard/Facebook )
How about swimming with COVID 19 this summer ...? Knowing that more than 2 billion disposable masks have been ordered, soon there may be more masks than jellyfish in Mediterranean waters ...! It is everyone's responsibility to avoid this new pollution, but also our elected representatives, deputies and public authorities. Indeed for several years some municipalities have been trying to fight against all these incivilities which destroy our environment and our health in the long term, so it might be time to unite all the right initiatives in order to resolve this new pollution as quickly and as firmly as possible . The health crisis has allowed us to see the best and the worst in us, if we do nothing it is the worst that will happen when it is simply a matter of common sense to avoid all this. I would simply say to finish that a disposable mask is thrown in the trash like any other waste elsewhere.

These figures have significantly grown as the world continues to battle against the coronavirus pandemic. Eric Pauget, a French politician in the Côte d'Azur, said that masks contain plastics such as polypropylene.

"With a lifespan of 450 years, these masks are an ecological timebomb given their lasting environmental consequences for our planet," Pauget wrote in a letter to President Emmanuel Macron last month. He called on the French president to address the environmental costs of disposable masks more assertively.

OceansAsia, a Hong Kong-based non-profit, aired a similar concern after dozens of disposable masks were seen in marine debris in Soko Islands, "an uninhabited island in the middle of nowhere."

"On a beach about 100 meters long, we found about 70," said Gary Stokes of OceansAsia adding that another 30 masks were found after a week.

The groups then checked other nearby beaches. "We're finding them everywhere," Stokes said. "Ever since society started wearing masks, the cause and effects are being seen on the beaches," he added.

Although some of the junk is due to carelessness, Stokes thought these lightweight masks were also being carried by the wind and ending as "another item of marine debris."

Unfortunately, marine life like porpoises and dolphins could mistake a mask for food. "We're constantly getting them washing up dead and we're just waiting for necropsy when we find a mask inside," said Stokes adding that "it's inevitable."

Read also: Shark vs. Deep Sea Giant Squid! At Least One of Them Lived to Tell the Tale via Photo