[SCAM] Viral Face Mask Exempt Card is Totally Fake, DOJ Clarifies; Here's What You Should Do

As cases of COVID-19 continue to increase in the United States, more people are calling for the public to wear masks to protect themselves and others. However, there have also been some groups that deny its effectivity and have accused the mask requirement as oppression.

Some have even resorted to creating fake health cards to excuse them from wearing masks. The so-called face mask exempt card that has been circulating on social media has already been reported as fake. "These postings were not issued by the Department and are not endorsed by the Department," said the Department of Justice (DOJ) in a statement. 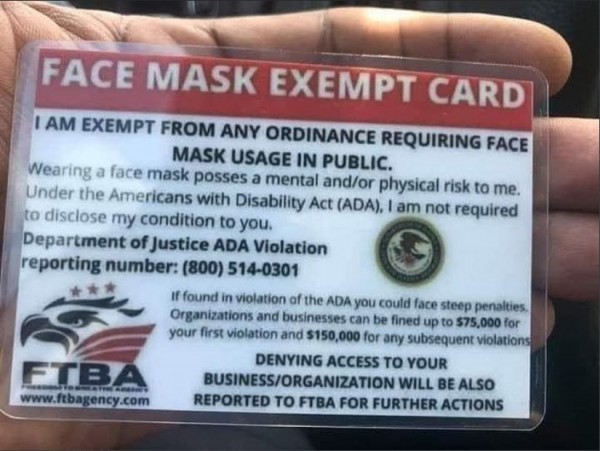 (Photo : Screenshot from Twitter post of @LanceBass)
DOJ Clarified that Face Mask Exempt is Not Endorsed: Reports Confirmed that It's Totally a Scam

HEADS UP fellow businesses.... This is not a thing. This is what happens when Arts and Crafts Karens have too much time on their hands. We will throw it in the trash and send them on their way. pic.twitter.com/VKACSA3pRU — Lance Bass (@LanceBass) June 24, 2020

According to CNET's latest report, the DOJ confirmed that the face mask exempt card that was tweeted on Wednesday, June 24 by former NSYNC star Lance Bass, is not actually a real thing, and might probably be used to scam people and establishments.

The bogus card states that wearing a mask may possess a mental or physical risk to the person using it. The image that was posted on Twitter shows a laminated card that falsely claims that an individual is not required to follow any mask-wearing mandates. The Twitter post has now received more than 50,000 retweets and 89,000 thousand likes, making rounds across various social media platforms online.

No such thing as face mask except card--DOJ

A former Republican candidate for Congress in Illinois also posted a similar flyer on Facebook, claiming the "Americans With Disabilities Act and by the Health Insurance Portability and Accountability Act of 1996" protects individuals against mask mandates. According to DOJ's report, all these posts stating that people are not required to wear masks are fake. 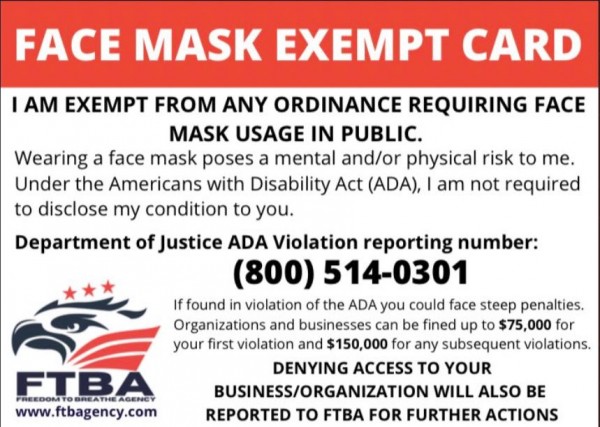 (Photo : Screenshot from Twitter post of @fourthside)
DOJ Clarified that Face Mask Exempt is Not Endorsed: Reports Confirmed that It's Totally a Scam

I’m not a legal expert* but this “Face Mask Exempt Card,” in addition to not being any kind of effective document, is also full of what we lawyers call “horseshit.”

*I am a legal expert pic.twitter.com/kHxncymFdy — Rick Jeffries (@fourtotheside) June 24, 2020

Americans are urged by the DOJ to avoid relying on cards and flyers, which are going viral, for information about the law. It is highly encouraged that if anyone has questions about the viral posts and are seeking answers, they must contact ADA.gov. The DOJ's Americans With Disabilities Act information line at 800-514-0301 must also be contacted.

Also Read: 'Anonymous' and 'LulzSec' Hired by WikiLeaks Founder? Here's What They Found