The Daily Mail Online reported that hundreds of elephants were mysteriously found dead in the African country of Botswana, as the country faces what it calls a "conservation disaster."

An estimated 350 elephants and more have died due to unknown causes. Aerial photos show sensitive images of carcasses scattered around the Okavango Delta, and the country's northern regions. 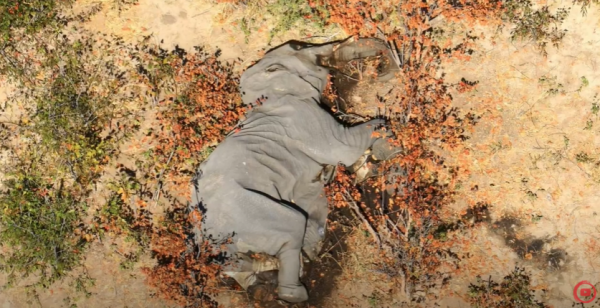 The first deaths of this kind happened in May when about 169 elephants were found dead at the Okavango Delta, Botswana's lush and marshy wildlife home. By mid-June, the number doubled, with about 70% of deaths happening near waterholes, local news reported.

The reasons for their deaths, however, are still unknown. Meanwhile, the government of Botswana has not yet tested the elephants' bodies for any traces of poisoning or pathogen infections. However, one of the causes that specialists are looking at is Anthrax. Cyanide poisoning is rampant in Zimbabwe.

Conservation director at National Park Rescue, Dr. Niall McCann said in the report, "This is a mass die-off on a level that hasn't been seen in a very, very long time. Outside of drought, I don't know of a die-off that has been this significant."

Scientists are working hand-in-hand with the government to test these animals and make sure they do not affect the lives of humans in the area. This is because according to these specialists, the transmission of animal pathogens is possible from humans to animals.

Before the discovery, the locals in the area noticed a specific habit among these animals. They were said to be walking in circles, which is an indication of neurological impairment due to poisoning or pathogens.

'If you look at the carcasses, some of them have fallen straight on their face, indicating they died very quickly. Others are obviously dying more slowly, like the ones that are wandering around. So it's very difficult to say what this toxin is," Dr. McCann further noted.

Another expert, the acting director for Botswana's wildlife and national parks department, Dr. Cyril Taolo, said, "We are aware of the elephants that are dying. Out of the 350 animals, we have confirmed 280 of those animals. We are still in the process of confirming the rest."

In addition, COVID-19 restrictions are slowing down the results of the tests since these are being sent abroad for more studies.

There weren't any vultures in the vicinity of the massacre. Scientists are saying there has to be something happening outside natural occurrences. COVID-19 does not move away from the list of the causes.

Botswana is a country in southern Africa and is home to a third of the elephants on the continent. The elephant population has grown from 80,000 to more than 100,000 in well-managed habitats.

However, poaching and malpractices in agriculture are still taking place. Botswana President Mokgweetsi Masisi is enacting measures on banning big game hunting to save the lives of these elephants.

Also Read: Elephant Daughters Step Up And Fill In For Matriarchs Poached For Ivory