Amazon.com, Inc.'s Chief Executive Officer, Jeff Bezos, sold 1.8 percent of the e-commerce company's shares that amounts to $3.1 billion to generate funding for his space company, Blue Origin, in their efforts to be part of the space race.

According to Daily Mail, Jeff Bezos, the world's richest man, sold around one million of his shares in the e-commerce company, Amazon.com, which he announced in his trading plan. Bezos sold Amazon's stocks during this time that the company is experiencing a massive 73 percent surge in their shares, reflected in the regulatory filings.

The Amazon.com executive is also vocal about selling its stock to fund his space initiative, Blue Origin, that joins the race as a privately-owned company in space.

Bezos' sell-out of the company's assets that amounted to $3.1 billion left the CEO with 54.5 million company shares that are estimated still to be around $174.64 billion in the current market. This sell-out is more than the CEO's total share sales in the year 2019.

Jeff Bezos is planning to put up their billion-dollar low Earth orbiter to widen the reach of the internet connection that will benefit the United States and possibly, the world.

The Amazon CEO is opening a new research facility in Redmond, Washington, which is dedicated to studying, designing, and testing the company's satellite--this will be part of Amazon's Project Kuiper System, which hopes to launch 3,236 internet-beaming satellites outside the planet's atmosphere.

These devices will be scattered to different lengths requiring only 578 satellites to be used by customers in contrast with Elon Musk's SpaceX Starlink network, which requires a minimum of 600 of these.

Amazon executive David Limp shared in his written statement: "We have heard so many stories lately about people who are unable to do their job or complete schoolwork because they don't have reliable internet at home."

This shows that the company is in full support of its CEO's plans in Bezos and Amazon's expansion in extending their reach to the cosmos. 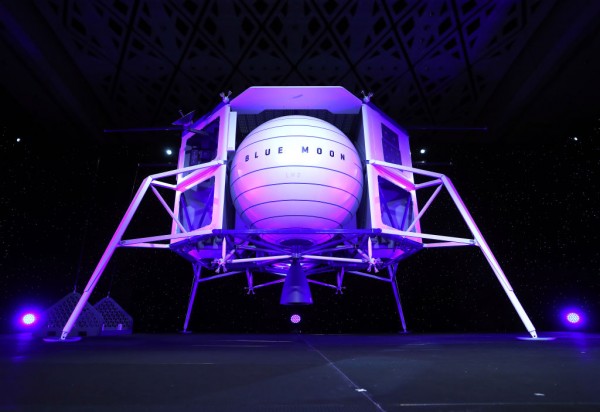 (Photo : (Photo by Mark Wilson/Getty Images))
WASHINGTON, DC - MAY 09: Jeff Bezos, owner of Blue Origin, speaks about outer space before unveiling a new lunar landing module called Blue Moon, during an event at the Washington Convention Center, May 9, 2019 in Washington, DC. Bezos said the lunar module will be used to land humans the moon once again.

Jeff Bezos' very own space and aeronautics company, Blue Origin Federation, LLC, is beginning to receive funding and buzz as its CEO is currently working for its progression.

Blue Origin was originally founded by Bezos last September 8, 2000, in Kent, Washington. The company currently functions as a space manufacturer and researcher that mainly focuses on creating spacecraft that everyone can use.

The private aerospace company aims to bring general people into space, living and working in other planets or cosmic locations to preserve the Earth. Blue envisions a "dynamic future for humanity" where people can utilize a reusable spacecraft that could bring them towards intergalactic places from their home planet.