Duke and Duchess of Sussex, Prince Harry and Meghan Markle, is revealed to be exploited and had their pictures stolen by Russian hackers, believing to include sensitive photos from the couple's trip to Jamaica, in the podcast about the new biographical book, Finding Freedom.

Express stated that the podcast, Royally Obsessed, discussed the contents of the biographical book that included a narration of the Russian hack. Podcasters, Rachel Bowie and Roberta Fiorito, royal family experts, detailed the hack and claimed that even sensitive photos were recovered in the "Spilling the Tea on 'Finding Freedom'" episode.

Bowie narrated that the hacked photos were uploaded on Tumblr and people thought they were "photoshopped". However, she believes that those photos were real and that they genuinely belong to Prince Harry and Meghan Markle.

Fiorito claimed that the Duke and Duchesses' "steamy" photos from their trip to Jamaica in 2017 were never revealed. The couple's journey is intended to attend a friend's wedding. This caused Prince Harry to be furious about the hack.

The podcast duo believes that those photos were on that level of sensitivity or "steaminess" to cause Prince Harry's "apoplectic" response as stated by the biographic book. The royal experts also believe that the Russians' hack invaded the couple's privacy despite being promised their privacy.

Duke and Duchess on Finding Freedom 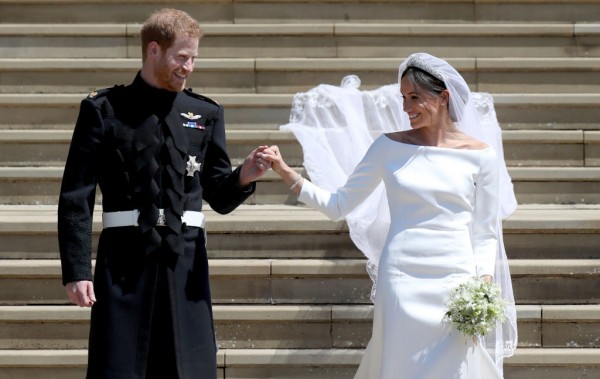 (Photo : (Photo by Jane Barlow - WPA Pool/Getty Images))
WINDSOR, UNITED KINGDOM - MAY 19: Prince Harry, Duke of Sussex and the Duchess of Sussex depart after their wedding ceremonyat St George's Chapel at Windsor Castle on May 19, 2018 in Windsor, England.

Daily Mail reports that the newly published biography, Finding Freedom: Harry and Meghan and the Making of A Modern Family, written by Omid Scobie and Carolyn Durand, narrated in one part, the couple's experience in being robbed by Russian hackers that took their private photos who then posted it on Tumblr.

Russian hackers targeted the online cloud storage account set up by New York-based photographer, Alexi Lubomirski, where the photos were uploaded. Over two hundred exclusive pictures of the Duke and Duchess were stolen, including some of the Queen's.

The photos also included the couple's never before seen wedding photos that were kept from the eyes of the public. However, people believe, and even the Duke and Duchess say that these photos were fake.

"On September 12 2018, a computer programmer based in Russia managed to hack an online cloud storage account that contained over two hundred unseen photos of Harry And Meghan that had been taken by the photographer Alexi Lubomirski." written by authors' Scobie and Durand in the book.

Alexi Lubomirski is a famed photographer that incorporated a touch of royalty and glamour in his portraits. He is also known to have taken the photos of Hollywood actresses Natalie Portman and Scarlett Johansson. He also took Prince Harry and Meghan Markle's engagement pictures back in 2017.

The famed photographer was breached by Russian hackers and had his work uploaded in the cloud, stolen. This included the Duke and Duchess' wedding photos that the authors, Scobie and Durand, said were "mostly for the trash". The photos stolen were mostly unflattering and have the couples' eyes half-closed.

For the first time, go beyond the headlines and discover the true story of Prince Harry and Meghan, The Duchess of Sussex.https://t.co/A7B06EMaDa pic.twitter.com/KjGD9DcXaV — Omid Scobie (@scobie) May 4, 2020

The book's release sparked controversy and talks about the royal couples' personal lives. This led people to believe certain aspects that were unconfirmed by Prince Harry and Meghan Markle, as both royalties deny their connection to the making of the book, despite text messages and the duchess' opinions.

Insider reports ten surprising details about the hit biography, Finding Freedom. This included the initial talks about Prince William having reservations for Markle and his brother, Prince Harry's, early relationship. The book confirmed that the "first interactions" went well, and she was welcomed by Prince William openly.